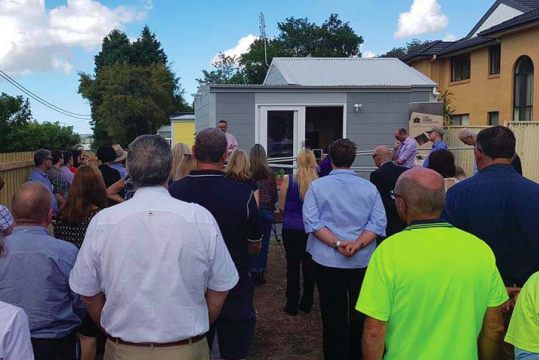 Opening of the Tiny Homes project in Gosford.

Project founder, Mr David Wooldridge, said the Racecourse Rd project was the first DA-approved, nontransportable tiny homes project in Australia. The site includes four single-occupancy tiny homes, complete with kitchens, double beds and bathrooms, and there is a common room on site. He described the project’s completion as a “pivotal step” in the three-year history of the Tiny Homes Foundation. Mr Wooldridge said his own desire to find solutions to homelessness came out of working with the homeless in Hornsby and wishing to start men’s refuges after witnessing the premature deaths of two homeless men in that area.

He then learned about the tiny homes movement in the United States and decided to partner with like-minded people, with the former Gosford Council, not-for-profits and service providers, and many good-hearted Australians to conceive of Australia’s first tiny homes. Deputy Mayor of Central Coast Council, Chris Holstein, said he had been an interested observer of the Racecourse Rd project throughout its construction phase, and said he believed the community was interested in the project. “People want to know what it is, what is happening, how is it going and will it work,” Clr Holstein said. He said the former Gosford Council’s innovative approach was to be congratulated and that he looked forward to the continued support of the new Central Coast Council. The Tiny Homes Foundation is working closely with Pacific Link Housing to secure the first occupants for the new tiny homes in Gosford.