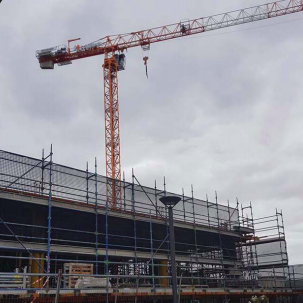 Work is well underway on the mid-rise commercial building at 32 Mann St, next door to the Taxation Office building, according to Executive Chairman of St Hilliers, Mr Tim Casey.
The development will house NSW Government employees and other local workers, and forms part of a broader plan to redevelop the 1.1 hectare parcel of land on the former Gosford Public School site.
Mr Casey said the group was excited to be working on a project of this scale and nature.
“Construction commenced mid-2017 on the new office building, with the office car parking well underway,” Mr Casey said.
“Now that it’s the new year, we look forward to seeing the structure rise above Mann St with the development of six levels of office space, including a ground floor that supports retail uses,” he said.
“The development is an important step toward delivering the government’s Central Coast Regional Plan, which will deliver jobs to the region and revitalise the Gosford CBD as an important economic and social centre of the Central Coast.
“Once occupied, it is estimated that the building’s workers will generate an additional $1.4m in retail expenditure within the Gosford CBD and $4.2m in the broader Central Coast economy per annum.
“We are proud to have worked on many projects of this nature and are committed to using local contractors and suppliers wherever possible, with the majority of workers on this project from the Central Coast.
“The long-term concept for the remainder of the site includes a mix of different development opportunities, together with generous public open space and connections through the site.”
St Hilliers has commenced early community consultation with Central Coast community members to assist with guiding a mixed-use masterplan for the remainder of the Mann St site.
“The Masterplan that we are currently working on is for the balance of the site as a community precinct.
“We are looking forward to engaging further with the community in 2018 to receive feedback which can be incorporated into the next phase of this iconic project,” Mr Casey said.
St Hilliers has almost 30 years’ experience in major developments, including 155 Clarence Street in Sydney and the Thornton Precinct in Penrith.
It constructed Kariong Mountains High School, IBIS Gosford and the NAISDA Dance School.
Vice President of the Gosford Waterfront Alliance (GWA), Ms Joy Cooper, said community consultation appeared to be missing from St Hilliers’ plans.
“If anyone is designing a precinct, they need to have an overall plan and concept,” Ms Cooper said.
“That is what happens with good design, rather than a ticky-tacky add-on and ad-hoc development,” she said.
“Without the performing arts centre location being determined, only being investigated, that affects the school site and what the final design for the remaining third of the school site should be.
“If a new building was put where the council is investigating locating the performing arts centre at the moment, it could mean that a building constructed to have a good view line may result end up looking at a brick wall.
“Council and the NSW Government had a perfect opportunity to design an overall concept that would have been a leading edge design for the community for now and for the future,” she said.
Ms Cooper said GWA had a meeting scheduled with the Central Coast Coordinator General, Ms Lee Shearer, for early February to discuss its concerns and priorities.
Central Coast Mayor, Jane Smith, reiterated comments she had made in December.
“As far as I am aware, our staff have been talking to St Hilliers about whether the Performing Arts Centre could be located on the final third of the school land,” Mayor Smith said.
She said she was waiting on a briefing from staff about the outcomes of those discussions.
Coast Community News has sent additional questions to St Hilliers and expects to be able to publish their responses in our next available edition.