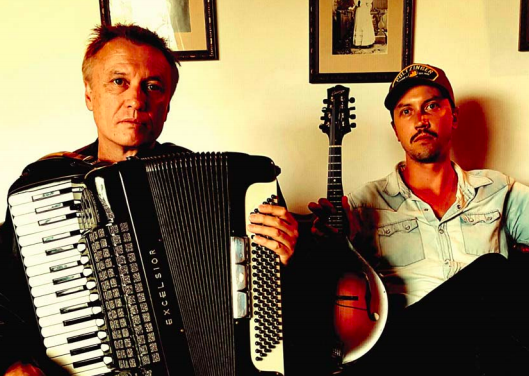 Gary and James Daley will perform at The Troubadour

An Australian father and son duo and an English folk singer are coming to the Troubadour folk club at Woy Woy at 7 pm on Saturday, February 24.

The Gary and Jimmy Daley Duo and Graeme Knights will perform on the evening. Troubadour president Mr Michael Fine said something special occurred when a musical father and son of the calibre of Gary and Jimmy Daley made music together. “This amazing duo brings together two renowned Australian musicians to explore the rich and timeless sound of accordion and mandolin, an enchanting instrumental combination relevant to their own musical lives and deeply connected to their family history,” Mr Fine said. “As well as Bluegrass classics and some old and new folk music, there may be some original songs as well as some pieces by Beethoven, Bach and Bartok,” he said.

Father, accordionist and pianist Gary Daley are best known performing in some of Australia’s elite jazz and world music bands, such as The Catholics. He has appeared regularly on ABC TV as part of the children’s show, Lah-Lah’s Musical Adventures. Son Jimmy Daley plays an array of stringed instruments including the mandolin, guitar, banjo and dulcimer, and is perhaps best known for his work with The Morrisons. Mr Fine said Graeme Knights was “a folk singer from England who learned his craft from singing and touring with some of the finest singers of trad.” He was director of the Doncaster Folk Festival for years. “Graeme sings shanties, gospel songs and other chorus songs and is great at getting an audience to raise the rafters,” Mr Fine said. “This is his first appearance in Woy Woy,” he said.