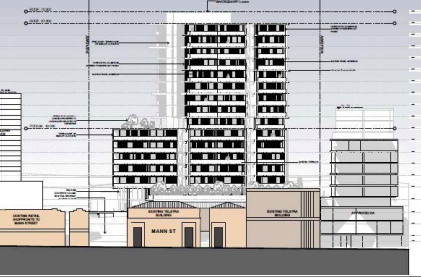 Designs for tower block at 21 to 25 Mann St, Gosford

A construction certificate has been issued to allow commencement of work on the $34 million, JRPP-approved, 140 unit residential flat building, at 21 to 25 Mann St, Gosford.

The project, which runs through to 92 Henry Parry Dve, was approved by the Central Coast Joint Regional Planning Panel in September 2015. Two applications for Section 96 modifications were accepted by Central Coast Council during 2017, the first to allow early works with no changes to the approved plans. The second was lodged on December 15, 2017, and approved on January 23, to allow piling to boundaries of the site, excluding Henry Parry Dve. According to a Central Coast Council assessment report for the JRPP, the site is 6,032 square metres and the Mann St frontage contains the former Gosford South Post Office, which is a heritage listed item and the Telstra building. Parlour La provides access to the northern boundary from Georgiana Tce, and there will be no access from Henry Parry Dve.

The residential flat building will be 15 storeys high, with three levels of basement parking, for 193 residential parking places, and 25 spaces retained for Telstra parking. The mix of apartments will consist of 19 one-bedroom, 106 two-bedroom and 15 three-bedroom. The development will have a gross floor area of 13,270 square metres. Around 15 percent of the site is proposed for deep soil planting and 464 square metres will be a landscaped communal open space on the roof terrace of level seven. “The development of this proposal will result in a change to predominantly residential use on this site instead of car parking,” Council’s report to the JRPP said.

“This is consistent with the objectives of the B4 zone and future nature and character of the zone,” it said. Council’s architect acknowledged that the southern section of the building will exceed the height control by four storeys, but said it was “largely compensated by a four-storey reduction on the northern section of the building. “This creates a view corridor for the buildings behind and breaks up the visual built that could result from a building of uniform height.” The main objections to the building were based on view loss and overshadowing. However, the applicant argued, and Council agreed, that the excess height over development controls did not result in any additional view loss or over-shadowing relative to the view loss and overshadowing that would have occurred if the development on the site complied with Council’s height restrictions.

For example, an analysis of unit 1, 100 John Whiteway Dve, located 75 metres east of the site, showed the development will result in a loss of about 50 percent of water views and mountain views. “This is significant, however, the loss would occur with a building of complying height, therefore the view loss is not unreasonable, and not as a result of the variation to height,” the Council report concluded. The developer will be required to carry out road and footpath upgrading works in Mann St in accordance with Council’s Streetscape Design Guidelines. The section 94 contribution required is $340,000, which will be used to provide facilities identified in a Civic Improvement Plan.