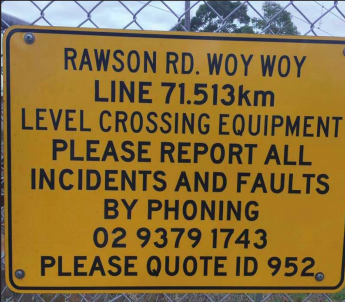 The failure of boom gates at the Rawson Rd level crossing at Woy Woy and an inadequate response from NSW Trains has added to the danger of the level crossing, according to Member of Gosford Ms Liesl Tesch.

Boom-gates and hazard lights malfunctioned in what Ms Tesch described as “the latest terrifying incident” that caused hours of mayhem and delays after their failure at about 9 pm on Wednesday, January 31, she said. “I’m told there was disarray for four hours with traffic banking up, drivers stopping in the middle of the crossing, backing up, and doing U-turns across traffic just to get out of the situation,” Ms Tesch said. “Even more worrying were reported from locals who contacted NSW Trains about the incident and were told that as a safety precaution trains were ordered to simply slow down to avoid vehicles and pedestrians on the tracks,” she said.

Ms Tesch said she would continue her calls for the NSW Government to come back to the table to work on a permanent solution for the fatal intersection. “Rawson Road is one of the most dangerous level crossings in the state, but this is a government that cares more about saving the dollars needed to end this madness and less about human lives,” she said. Ms Tesch said that one barrier stuck down at about 9 pm and red lights continued to flash without oncoming trains. As a result, cars were driving around barriers on the opposite side of the road to get through. “What I’m hearing about the night’s events is terrifying, and we are lucky that there wasn’t a loss of life,” Ms Tesch said. “Governments around the country are investing the money needed to get rid of dangerous level crossings, but the NSW Liberal Government doesn’t seem to care,” Ms Tesch said. “Last night’s chaos comes only a year after an elderly man lost his life when he was hit by a train while crossing at Rawson Rd.”

Popular cruise is cancelled as channel silts up