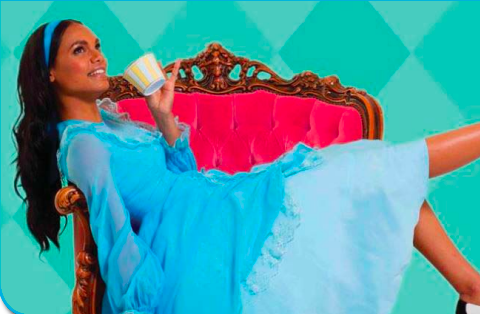 A new adaptation of children’s classic, Alice in Wonderland, which has been receiving rave reviews in its world premiere season at Sydney Festival, is heading to The Art House on March 2.

Alice in Wonderland is adapted by, Mary Anne Butler, and brought to life by producer, Michael Sieders, who reimagines Alice in a colourful children’s playground, and brings through the storyline, strong messages of empowerment for women and girls and the importance of following your dreams, as well as a healthy dose of Aussie culture. The character of Alice is played by, Dubs Yunupingu, the first Indigenous woman to play the role. The feisty Dubs brings the character to life flawlessly. Alice is a girl that just wants to play AFL, but is constantly hampered by society’s expectations that she engage in more ‘girly’ activities, as well as a tight, uncomfortable dress she is forced to wear.

A little toy rabbit lies on the floor of the stage and suddenly comes to life, stealing Alice’s long white hair ribbon and disappearing down the rabbit hole, set up as a giant slippery dip on the stage. The familiar characters of the Mad Hatter, the Caterpillar and the Queen of hearts are brought to life by three talented other young performers, and the show brings together drama, dance and puppetry. With enough happening on the stage to keep very little ones entertained, and a strong moral message that adults and older children will appreciate, Alice in Wonderland is a beautifully directed and timely reminder that all children should have the opportunities to follow their dreams.

Alice in Wonderland in Gosford