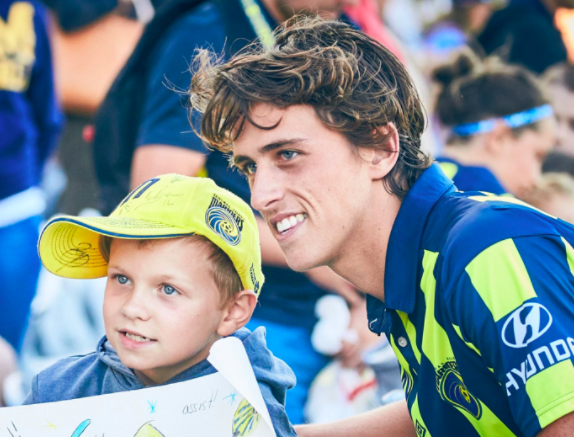 Wamberal boy and Central Coast Mariners star on the rise, Lachie Wales, has spoken to Central Coast Mariners Media about his journey from A-League ball boy to A-League baller.
Hailing from Wamberal, Lachie Wales has spent his entire life on the Coast, following the Mariners.
On Saturday January 6, Wales made his second ever Hyundai A-League appearance for his hometown club and stole the headlines by delivering an assist with his first touch a minute after coming on.
The assist resulted in Blake Powell tapping home the equaliser to earn a point away from home against Melbourne Victory.
The following week, Wales was thrown into the boiler of an F3Derby as a first half substitute and backed up his impressive showing against Victory with a promising performance against Newcastle.
Then on January 14, Wales faced the exciting prospect of debuting at Central Coast Stadium in front of his friends and family for a club that he bleeds for.
“I’m a Central Coast boy and I grew up in Wamberal,” Wales said.
“I played my juniors for Terrigal United before going on to play for Central Coast in the academy for a few years now and I’m really enjoying my football here.
“I’ve always been going to Mariners’ games and I used to be a ball-boy at the Mariners’ games, so it’s a big dream of mine.
“I love putting on the jersey whenever I get the chance.
“Playing at Central Coast Stadium would obviously mean a lot to me.
“I’ve spent my whole life here; my family are here, so I would have a pretty big support group out there, and if I did get the nod, I would just give it my best shot,” Wales said prior to the match.
A humble Wales reflected on his assist against Melbourne Victory as ‘just doing his job’, and thanked Head Coach, Paul Okon, for showing confidence in him.
“It was good to get an assist, that’s your job as a sub,” Wales said.
“You come on in the hot weather and the game opens up a bit, so I am just trying to repay the faith that Paolo puts in me, it’s my job to come on and make a difference.
“I felt more excitement than nerves.
“I love being out there and I just want to do a job for the team.
“Paolo believes in me; my teammates believe in me, so I just go out there and do my best.
“You just need to play your natural game.
“If Paolo likes what he sees, he likes what he sees.
“I just always try to put my best foot forward.
“He’s a great coach who knows a lot about the game.
“He puts a lot of confidence in me, I am really grateful for the opportunity he has given me,” Wales said.