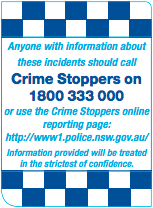 A man has died after a ‘one punch’ incident at The Entrance on the Central Coast.

About 1am yesterday (Monday 1 January 2018), an altercation took place inside a licenced premises on Fairview Avenue, The Entrance.

Following the altercation, a 30-year-old man was outside the premises when a 49-year-old man allegedly ran towards him and punched him once to the face.

The younger man fell to the ground, hitting his head on the concrete and losing consciousness.

He was taken to Royal North Shore Hospital where he died earlier today (Tuesday 2 January 2018).

A 49-year-old man who was arrested and charged with assault occasioning grievous bodily harm has now had his charge upgraded to assault causing death.

He was refused bail in court today and will appear at Wyong Local Court on Monday 8 January 2018.

Police are urging anyone with information in relation to this incident to call Crime Stoppers on 1800 333 000 or use the Crime Stoppers online reporting page: https://nsw.crimestoppers.com.au/Information you provide will be treated in the strictest of confidence.

We remind people they should not report crime information via our social media pages.