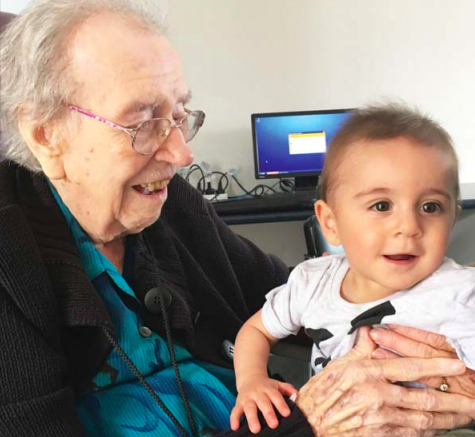 Ms Molly Bonamy is celebrating her 105th birthday this January

Her father thought Jean was too grown up a name for a little baby and she has been known as Molly ever since. Ms Bonamy’s father died when she was four years old and she grew up with her mother, grandparents and brother Geoff in Summer Hill. She attended Summer Hill School and later the domestic science school and left for secretarial college at age 15. Eventually, she became a shorthand teacher at the same college, leaving some years later to pursue a career as a legal secretary. As a young girl, she enjoyed movies, ballroom dancing and singing and was an accomplished soprano and soloist in her local Congregational church choir.

Ms Bonamy also enjoyed amateur dramatics. At 28, she married Mr Geoff Bonamy, a young solicitor whose family had been friends of her family for many years. They moved to Ashfi eld where they raised their daughter. She was able to help him in his legal practice. During World War I, Ms Bonamy worked part-time as the secretary to a major based in Sydney and also made camouflage nets for the army. Ms Bonamy was always involved in secretarial work for charity, both for the church and the Scottish Hospital in Paddington as well as several other organisations.

Ms Bonamy, her husband and daughter moved to Dover Heights, Sydney, in 1960 to be closer to relatives and they became involved in the local church at Vaucluse. After her husband’s death in 1978, Ms Bonamy remained in Dover Heights until 1999, when she moved to Umina to be close to her daughter and grandson. At the age of 101, she moved to Blue Wave Living in Woy Woy. Ms Bonamy has a daughter, Sue, a grandson, Geoff, and two great-granddaughters, Sophie and Abigail. She said it was a cause of constant amazement to her that she has lived to the age of 105 years. When asked the secret of her long life, she always says she doesn’t really know.