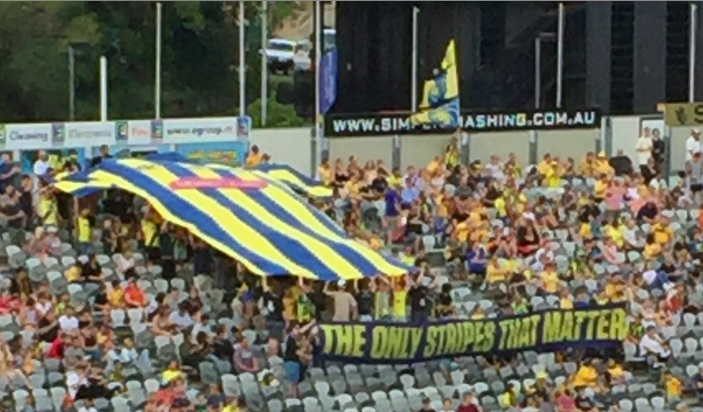 Fans hold up a giant Mariners Shirt at the traditional NYE game in Gosford.

A tight battle between the Mariners and the Wellington phoenix aka Nix saw both teams take a point from Central Coast stadium on New Year’s Eve.

Despite a scoreless first half, neither team went wanting for opportunities. For the Central Coast, Connor Pain and Andrew Hoole made for a dangerous combination in the front third. Within the first ten minutes, Hoole cut through the ‘Nix defence with a pass to Pain on a burst of speed, but the winger’s low shot fired wide of the post.

Asdrubal was a mainstay of the Mariners’ attacking forays, the speedy Spanish forward worked tirelessly to create space, and was narrowly denied a goal in the 20th minute by a timely tackle from Andrew Durante at the near post, after Pain sent a precision ball across the box.

The visitors did not stay quiet, and shot-stopper Ben Kennedy was forced to stay razor sharp. ‘BK, who ultimately earned man of the match honours, made save after save to deny Wellington forwards Krishna and Kaluderovic, his outstretched gloves to claim another clean sheet.

Wellington were handed a clear opportunity to steal the lead in the 32nd minute. Kaluderovic teed up Thomas Doyle directly in front of goal, but Doyle sent the ball up an over the crossbar.

Neither team could break the dead-lock, and returned to the pitch after the half-time break hoping to claim the lead.

The second-half stayed quiet in the opening minutes, but the Mariners looked poised to claim a goal. Half way through the second stanza, the Central Coast had an injection of pace and intensity with substitutes Storm Roux, Blake Powell and Kwabena Appiah, who helped to launch a series of relentless attacks.

In the 81st minute, Blake Powell looked set to fire home a volley from close range, but he couldn’t get on top of an awkwardly bouncing ball, and the chance was swept away by Marco Rossi.

The final moments of the game were laced with tension as the Central Coast kept up a punishing attacking pace. Kwabena Appiah created multiple clear cut chances in the dying stages with his blistering pace, but just couldn’t find the back of the net.

The home crowd of just shy of 10,000 urged the Yellow & Navy on, right until the final whistle but the home side just couldn’t break Italiano and were forced to settle for a point against Wellington.

The Mariners drop to 9th position on the A-league ladder on equal points with Brisbane Roar, while the Phoenix remain the cellar dwellers at 10th place.

The next Mariners game is against in form Melbourne Victory in Melbourne on Saturday January 6th. The next home game at Central Coast Stadium, Gosford is Sunday 14th at 5pm against Melbourne City.