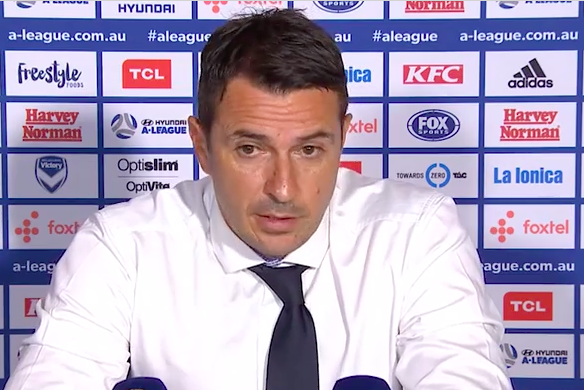 The Central Coast Mariners will face a well rested and in form Newcastle Jets on Tuesday night at McDonald Jones Stadium in what is affectionately known as the F3 derby.

Mariners coach Paul Okon conceded at a weekly press interview “It’s not ideal. The Jets have had 6 days to recover, we have 3 and we play in this kind of weather”

Okon continued “I could sit here and whinge but that is not going to help. The good news is we have no significant injuries… we need to freshen up … it’s a derby and we have to be up for it.”

This will be the Central Coast based team’s second away game in 3 days, after a thrilling 1 all draw in Geelong against Melbourne Victory on a scorching Saturday evening match. The Mariners came from behind in that match to equalise and earn themselves an important competition point.

To compound the team’s challenges the Mariners are now without three important young players, all on duty at the Junior Asia Cup Competition in China this month. Mariners management lead a multi-club appeal against the Football Federation Australia in this regard. The clubs argued that the Junior Asia competition was not an official FIFA competition and it unfairly affects clubs that were recruiting young Australian. The appeal was lost.

For fans wishing to attend the event club members are reminded that they receive free entry as part of a unique partnership between the two clubs.

The Mariners will play a third game on Sunday evening at home in Gosford against Melbourne City.

Lewis Miller has picked up a scholarship contract with the Mariners