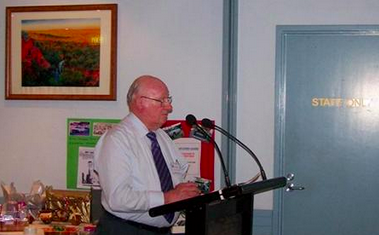 Former Gosford Mayor and local Liberal MP (1973 – 1976), Mr Malcolm Brooks OAM, has told the NSW Government to get its nose out of Central Coast business and leave the future of the Gosford CBD in the hands of the newly-elected Central Coast Council.
“Another Gosford CBD plan?” Mr Brooks said, in response to the announcement that the NSW Government Architect was tasked with developing a new framework for the revitalisation of Gosford.
“The NSW Minister for Planning, Mr Anthony Roberts, must be aware that there is already a plan adopted by his Government called, Our City, Our Destiny, but that it was not acted upon,” Mr Brooks said.
“While I welcome the expertise of the Government Architect, his brief must be to report to our newly-elected Council, not some unelected bureaucratic panel,” he said.
“The Central Coast Regional Development Corporation (CCRDC) initiated the disastrous rezoning and subdivision of the old Gosford Primary School site for the ATO and State Government offices on the waterfront.
“It’s time Mr Roberts abolished the CCRDC.
“As one of the largest Councils in NSW, the responsibility for Central Coast’s future now lies with our newly, publicly-elected, Councillors.
“Minister Roberts needs to understand that it is called democracy.
“According to media reports, the Government Architect will appoint a multi-disciplinary design team and, after a period of consultation and workshops with key stakeholders, the team will present a final report to Central Coast’s Coordinator General, Ms Lee Shearer, in the New Year.
“What does Anthony Roberts actually mean by this?
“There is no mention of Council, community or local planning, development or design expertise.
“Parliamentary Secretary, Mr Scott MacDonald, has said that all the groundwork has been laid and it is now time for action.
“Well, he will find it in the ‘Our City, Our Destiny’ plan, supported by 85 percent after public consultation.
“On local issues, we don’t want to be governed by Macquarie Street,” Mr Brooks said.