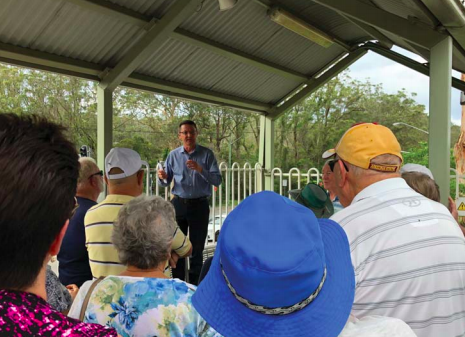 Member for Wyong, Mr David Harris, has blasted the NSW Liberal Government for failing to fund much needed projects on the Central Coast, after it was announced that the NSW Budget Surplus now stands at an estimated $3.3b for this financial year.
“The government has come under intense scrutiny recently after it was revealed that they plan to spend $2b knocking down and rebuilding stadiums in Sydney, while vital projects across the state face delays and funding uncertainty,” Mr Harris said.
Mr Harris is concerned that the government has continued to be too Sydney centric, and is putting stadium upgrades before vital Infrastructure such as upgrading the Pacific Hwy through Wyong and installing long awaited lifts at Tuggerah Station.
“The budget surplus and stadium spend has continued to add to a Sydney focused narrative for the government as regional areas, such as the Coast, continue to see the starving of funding in their local TAFE’s and the decay of some of our prominent local sporting infrastructure.
“I’m calling on the government to focus on the infrastructure priorities we need in our communities before it splurges on Stadiums in Sydney,” Mr Harris said.
“The Central Coast isn’t an outer suburb of Sydney for the government to ignore.
“We are our own rapidly growing region and we need the Infrastructure to match it,” he added.
Parliamentary Secretary for the Central Coast, Mr Scot MacDonald, hit back at Mr Harris’ claims.
“In 2011, David Harris and his mates Kristina Kenneally, Eddie Obied, Joe Tripodi and Ian Macdonald, were kicked out of office for failing the people of the Central Coast and NSW.
“They left a net government debt of nearly $40b.
“The State was borrowing to pay public sector wages.
“They showed contempt for public schools with a $1b school maintenance backlog and a massive infrastructure underspend.
“The NSW Liberal/Nationals Government won’t be taking financial advice from Mr Harris anytime soon,” Mr MacDonald said.
“In contrast, the Coalition is spending over $80b on infrastructure over the next four years, including more than $500m on health infrastructure on the Central Coast; more than $700m on the school maintenance backlog across NSW (with an accelerated program of works on Coast schools over the summer), plus record spending on roads.
“Mr Harris needs to get out of his air conditioned office and stop spending wasted time on disingenuous media releases.
“Have a look at the public works underway on the Central Coast.
“My offer to David is to spend a day with me talking to Coasties.
“They remember what it was like under Labor.
“No one wants to go back there.
“It was economic incompetence while robbing from future generations,” Mr MacDonald said.