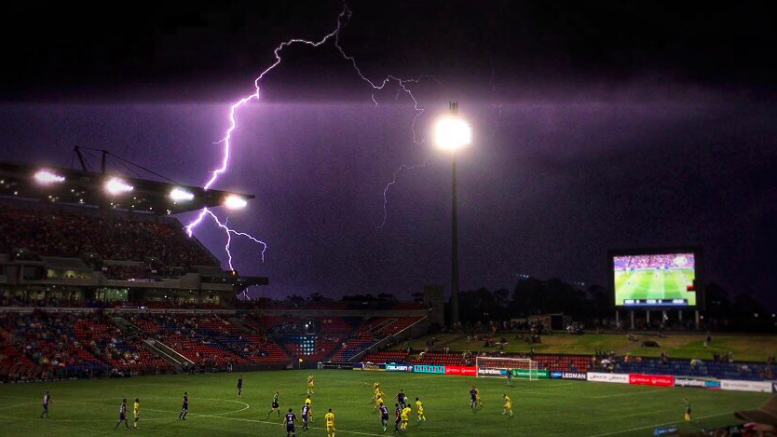 The Newcastle Jets broke the flow of the game against the Mariners when Josh Rose received a second yellow card, reducing the Mariners to 10 players.

The Mariners dominated the game and at 72 minutes looked likely to come away with a draw and one competition point.

The second half send off, the Central Coast Mariners fought until the final whistle, only to be handed a bitter defeat by two late Newcastle Jets goals.

The game was almost stopped due to a spectacular lightning storm that surrounded the ground just before half time. See fan sourced image.

The loss also comes at a price for the Mariners who will now be without Josh Rose (suspension) and Andrew Hoole (suspension) whilst Connor Pain & Wout Brama remain under an injury cloud as a result of their first half injuries. Danny De Silva, Trent Buhagiar & Tom Glover are all still unavailable due to national team duties ahead of next Sunday’s home match against Melbourne City.

It was an open first half in Newcastle which provided acres of space for the Mariners’ Dutchman Wout Brama and Tom Hiariej to work their magic. Ultimately, Tom Hiariej went on to claim man-of-the-match honours for his heroic output.