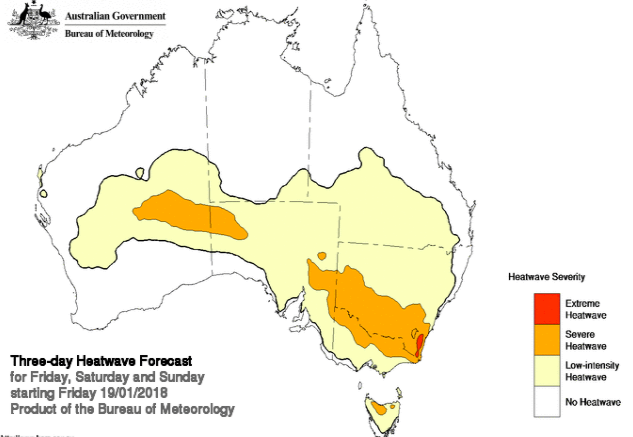 Offical heatwave warning from the BOM

The Bureau of Meteorology has warned the Central Coast to brace for a heatwave from Friday, January 19.
Despite the cool conditions that kicked off the week from January 15, Mr Johnathan How, from the Bureau’s National Operations Centre, has warned Central Coast residents to brace for an extreme heatwave.
Mr How said a high-pressure system which had been building in the Tasman Sea was now moving south-east across the country, bringing with it hot, dry winds, thunderstorms and temperatures in the 30s and 40s for most of the south to the east coast.
According to Mr Howe, the system which is travelling over South Australia will first impact Tasmania and Victoria before breaking across NSW.
Mr How also said that there would be little to no chance of rain easing these conditions.
The system is expected to make itself known to the Central Coast by Friday, January 19.
Mr How also cautioned those commuting to Sydney for work, with temperatures in the city expected to linger in the high 30s to mid-40s from Friday throughout the weekend.

First heat wave of the season