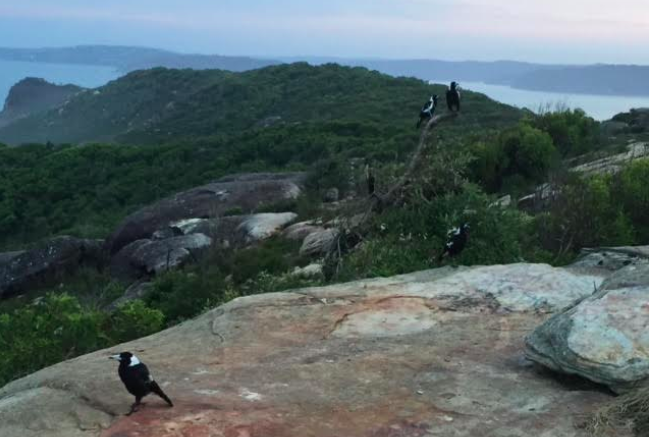 A family of magpies use the ancient geology of the Bouddi area as a stage.

[Local History] The Bouddi Peninsula has a long history of change: rock formation, rock breakdown, soil deposition and re-formation of new rock.
While the Bouddi Peninsula is at present bordered by the ocean, this stretch of land was at one time 10-15 km inland.
About 200 to 290 million years ago, there were creeks and rivers carrying sediment and depositing it as they came close to the sea, laying the basis of the present sedimentary rock.
There would have been lakes and lagoons, surrounded by vegetation and inhabited by animals and birds.
An uplift of the land on the east coast of Australia began and these sediments slowly became the rocks of the Bouddi Peninsula.
Sandstone formed from sand deposits, shale from mud and silt, the conglomerate from mixtures of pebbles and sand and mud.
All of these had been deposited by the flow of water down creeks and rivers, having been broken from rocks higher up and further inland.
The rocks we see on an exposed cliff on our coast have been remade from earlier rocks, eroded and broken down and moved, sometimes from far away.
They are called sedimentary rocks because they have been formed from sediment.
The sandstone, which is found at the tops of our hills, is known by geologists as Hawkesbury Sandstone and the other layers underneath together form the Gosford and Terrigal Formations: shale, softer sandstone, and ironstone, which is sandstone mixed with clay and some conglomerate.
The rocks that are now in existence here are in turn continually being broken down due to the action of water and wind, heat and cold, and are the basis of our soils: sand, loam and iron-rich laterite.
These soils, in their turn, influence the type of vegetation that is able to grow here.
The vegetation then supports animals, including the many insects that we rarely notice, unless they are attacking us like the mosquitoes do.
The vegetation and the animals, including those from the sea, were able to support the first humans who inhabited this area.
About 19,000 years ago earth’s climate became warmer, causing the melting of the polar ice caps and a rise in sea level resulted.
As this happened, the sea flooded into the river mouths and valleys and further eroded their shores.
So inlets like Brisbane Water were formed.
The very thing that millions of people on earth are now fearing might happen in the future has indeed happened in the past.
The earth has warmed up, melted the icecaps and the sea level has risen.
As it rose the waves began their work again to break down the sedimentary rocks along the shore.
The formation of rock shelves here and all along the coast of NSW set up a wonderful habitat for many marine animals.
Special rock features like tessellated pavements, which can be seen on the coastal walk from Putty Beach to Bullimah Beach, are formed by the shrinking and swelling of clay.
When clay becomes wet it swells and it shrinks again when dry.
If you have a brick house built on clay soil with inadequate foundations, you will know all about this action, as cracks appear in your walls.
Geological time is very long compared to our short lifetimes and most of these geological happenings have been a long time in the process.
When I look at the tessellated pavements, I am seeing “geology” in action.
Uplifting of the land has continued and we now have a quite spectacular coastline of headlands, rock platforms, bays, beaches, dunes and lagoons.
Because the underlying rocks are sometimes softer than the uppermost Hawkesbury Sandstone, caves have been formed and these provided shelter for animals and birds and earlier human inhabitants.
Laterite, the soil found at Killcare Heights, is another interesting feature of the area.
It has been formed over the millennia as the surface sandstone has been weathered, decomposed and chemically leached of its silica (sand).
It is red, soft and crumbly, but it becomes extremely hard when exposed to the air, forming solid boulders.
Laterite is neither a mineral nor a complete soil.
It has been used locally for making bricks to build houses.
The Anstice House is one example of the use of laterite to build an attractive house.
The Landscape that is now such an attractive feature of the Bouddi Peninsula, is a result of all these past geological happenings and of human intervention into the geology.