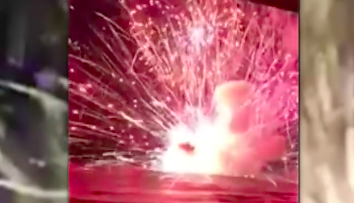 Terrigal: Police and emergency services are still investigating the cause of the explosive fire that took place on board the barge chartered to launch a public fireworks display on New Year’s Eve.

The barge that sank after an explosion during the middle of the 9pm fireworks show was retrieved.

Event organiser David Lambert said “we believe that one of the ordinances exploded inside the canister instead of in the air”.

The technicians responsible for the display received only minor injuries after they abandoned the barge quickly before it exploded.

Fire Rescue NSW and emergency crews, including the Marine Rescue, Rural Fire Service, Police and Ambulance, all attended the scene and the NSW Environmental Protection Authority is monitoring pollution from the wreckage.

Several people posted messages on the Police Facebook post questioning why the barge was so close to shore.

The last time there were New Year’s Eve fireworks on the beach was 18 years ago. The event was organised and paid for by a consortium of local businesses.

Several people posted messages on the Police Facebook post questioning why the barge was so close to shore.