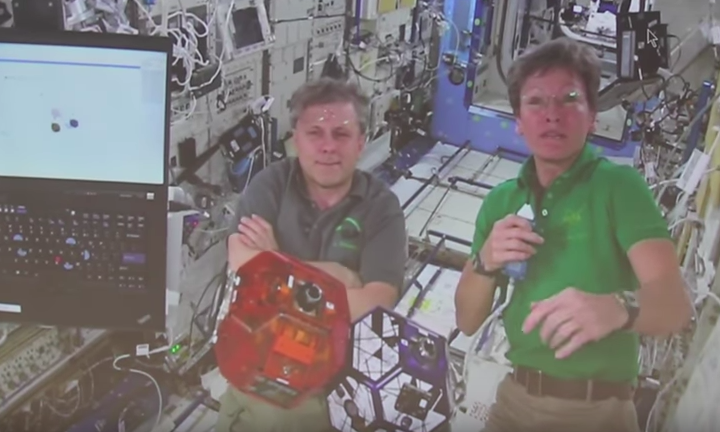 Image from the International Space Station

Students from Gosford High School and four other NSW high schools gathered with family and friends to watch as computer coding they had written was used to control NASA robots inside the International Space Station (ISS).
The students gathered to watch the 2017/18 championship of the Zero Robotics international high school programming competition, organised by NASA, and top tech university, Massachusetts Institute of Technology (MIT).
The competition was live-streamed across the globe, including at an on-campus University of Sydney event.
The Zero Robotics competition challenged students to test their coding skills on basketball-sized NASA robots, known as SPHERES (Synchronized, Position Hold, Engage, Reorient Experimental Satellites) which float in zero gravity in the ISS.
The competition progressed through multiple rounds of increasing complexity during 2017, before culminating in the final championship event, which saw the code that was written by the students being used to move the robots inside the space station, racing against robots controlled by students around the globe, to complete a set of tasks.
The NSW schools beat more than 200 schools from around the world to make it to the finals event.
“Participating in Zero Robotics allows high school students to advance their skills in engineering, science, maths and computing, and in previous years, we have seen some of these students be inspired to continue studying these subjects at university.
“With the Australian government recently announcing plans to establish our own space agency, these competing high school students could very well be among Australia’s first generation of local space engineers,” said University of Sydney Executive Director of Space Engineering, Mr Warwick Holmes.
“Zero Robotics proves that anyone, of any age, can learn to code if you’ve got the drive to learn.
“Zero Robotics offers students that motivation.
“It’s just like playing a video game, except that it’s actually happening in real life, in space,” said Zero Robotics competition coordinator, Ms Penny Player, who is studying mechatronics engineering and physics at the University of Sydney.

School to introduce computer coding classes from K to Year 6