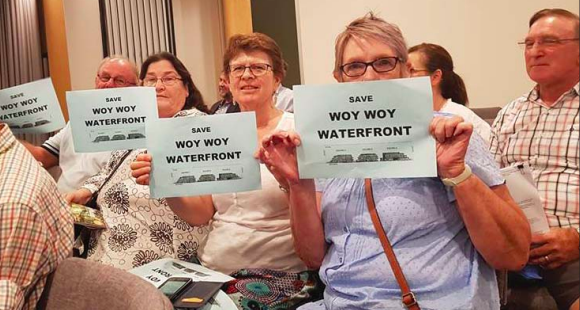 The Save Woy Woy Waterfront group has called on Central Coast Council to oppose the redevelopment of Sporties at Woy Woy.

It has asked the council to make a submission to the Joint Regional Planning Panel against the current proposal for land at the corner of Brick Wharf Rd and North Burge Rd, Woy Woy. Mr Ross McMurtrie of Woy Woy told a Council-organised residents’ forum that the group was “very well represented” and pointed to members in the public gallery holding Save Woy Woy Waterfront signs. He said the site was in “Woy Woy’s prominent premier recreational space next to the waterfront, a recently refurbished children’s playground, a dragon boat club, Sea Scouts hall and fishing club. “My family has been living in one of the foreshore cottages for the past 40 years,” he said. Mr McMurtrie said the proposal to include an “indoor fishing club” as part of the three-building proposal for the site was “obviously inadequate and many of the fishing people are very unhappy about it”.

The views of the community had been summed up by the 84 submissions which could be seen on the Council website, he said, and offered a summary of the salient points made in those submissions. He said there was “no mechanism to ensure the supposed senior living quarters will be occupied by seniors”. “They could all be rented out on Airbnb.” “The top issue raised with the most objections was the issue of flooding,” he said. He urged councillors to visit the site at high tide between January 2 and 5 when king tides were expected “and see what a high tide is like down there”.

Privacy, parking and the community’s loss of a competitive bowling club were other issues raised in objections that had been registered with council, he said. Mr McMurtrie called for the elected Central Coast Council to form a position on the development and make a submission to the planning panel. He also asked that Council adopt uniform building height and floor space ratio standards for all RE2 zoned lands across the whole Central Coast area. “Under the Gosford Local Environmental Plan, all RE1 and RE2 land has no maximum height level, whereas every RE1 and RE2 piece of land in the former Wyong Council has height and floor space ratio limits. “So I think, now we are amalgamated, we should do something and I know which way I would go,” he said.

In response to a question, Council Environment and Planning director Mr Scott Cox said “I am aware of other councils that have made submissions on matters going to the Panel so there is nothing stopping this council from putting in a submission,” he said.