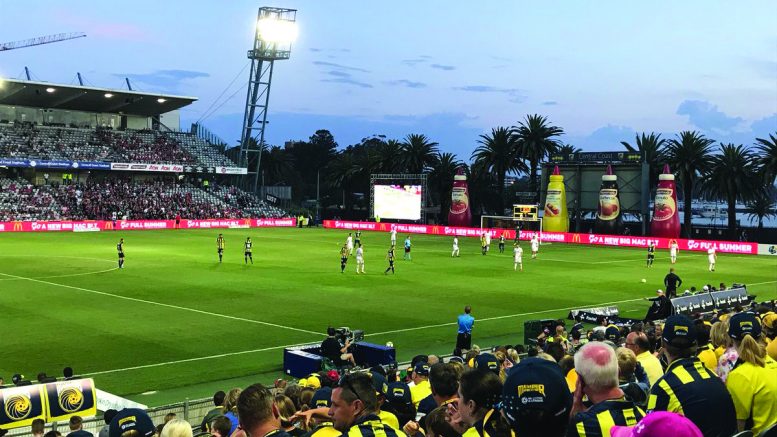 Video-Assistant Referee (VAR) controversy was the major talking point after the clash between the Central Coast Mariners and the Western Sydney Wanderers, on Saturday, December 16, where the visitors emerged 2-0 winners over a brave Mariners’ team reduced to nine men.
The Mariners welcomed back Spanish striker, Asdrubal, but were still missing the midfield mastermind, Tom Hiariej, who succumbed to injury last week.
Western Sydney Coach, Mr Josep Gombau, elected to keep captain, Robbie Cornthwaite, on the bench, after he missed a training session earlier in the week, which saw, Mark Bridge, wear the captain’s armband.
The Mariners started strong in the first half.
Barely two minutes passed before, Andrew Hoole, made an ambitious run up the middle, but his strike was denied by a last-minute clearance from, Aspropotamitis, who came across in cover defence.
“Hooley” had a hand in the next opportunity for the Yellow and Navy, a scramble by the post between Asdrubal and Hoole, which was scooped up by keeper, Janjetovic.
Reminiscent of the Mariners’ last home game against Perth Glory, Jake McGing was a revelation on the right.
From there, the Wanderers regained the momentum that they had been missing in the Sydney derby the week before, taking control of possession, and a quick counter attack allowed, Brendon Santalab, to fire home from outside the area.
A meeting between these two teams is always fiery, and the first half had bookings to match the physicality of the game.
Santalab and Risdon each received a yellow card, and Liam Rose was the first Mariner with a booking.
The Yellow and Navy continued to press for opportunities as the first half drew to a close.
Fancy footwork from Hoole in the middle of the park, found McGing on the right wing, whose perfect cross to the far post came just a second too soon for, Danny De Silva, and an exceptional save from the Wanderers keeper denied, Connor Pain, from sending a neat chip curling into the top corner.
With the Mariners’ opportunities going unrewarded, they headed into the sheds at half time trailing 1-0.
Returning in the second stanza, the Wanderers did not delay in doubling their lead.
Five minutes into the second half, another Red and Black counter attack culminated in a sharp finish from Spanish striker, Cejudo.
In response, Asdrubal teamed up with, Danny De Silva, sending through a brilliant pass to give the number 10 an opportunity in front of goal, but De Silva couldn’t quite bend the ball inside the far post.
From the 55th minute, the game became dominated by yellow cards.
Across the second half, referee Alex King handed out a total of five yellow cards, all to Western Sydney players: Bonevacia, Llorente, Cejudo, Riera and Bridge.
However, the talking point of the second half was undeniably the VAR.
In the 61st minute, Wout Brama was awarded a yellow card for a challenge on Bonevacia, but the decision went to the VAR for review, where it was decided to instead issue the Mariners’ Dutch midfielder a straight red card, much to the disbelief of Mariners’ fans.
Then tragedy struck for the Central Coast again, in the 77th minute, when a yellow card given to McGing for a challenge on Baccus, was sent for video review, and the referee made the decision to again upgrade the yellow card for a red.
Now down to nine men, the Central Coast rallied for the last minutes of the game.
Captain, Alan Baro, took a fierce long-range volley that deflected for a goal kick, and, Josh Rose, capped off an ambitious run with a powerful shot that just curled over the crossbar.

Despite their best efforts, a severely depleted Mariners squad couldn’t fight their way onto the scoresheet, and the Wanderer’s held onto their 2-0 lead until the final whistle.
Santalab’s first goal in the 27th minute saw the Wanderers merciless on the counter attack.
Keeper Janjetovic sent the ball out to, Mark Bridge, who fed to the top of the box, where Santalab was waiting to shoot past Kennedy into the bottom right hand corner.
The Red and Black struck on the counter again at the 57th minute, when Baccus charged through the midfield and played onto Santalab, who slid a tidy ball across for Spanish Cejudo to finish.
Central Coast Mariners’ Coach, Mr Paul Okon, was visibly distraught about the VAR in his post-game interview.
“I just don’t understand it [VAR],” Mr Okon said.
“If both challenges were violent, I think we would have seen protests from the Wanderers’ players or the Wanderers’ bench, and they were in front,” he said.
“There was no reaction, the reaction came from the gentleman sitting upstairs.
“I can’t logically explain it.
“If you came to this game tonight, and you left no longer in love with football, who could blame you.
“I don’t want to take anything away from the Wanderers, but it was disappointing.
“Before VAR wasn’t there, everyone wanted it, everyone was for it, but if you’re going to get it wrong, consistently, then I don’t know.
“I think it’s probably what everyone is talking about.
“If you’re going to send off players for those two challenges, you’d be sending players off every minute of the game.
“Roly falls over, Baccus falls over, but the reaction of the Wanderers’ players and the Wanderers’ bench, they were bemused as to why the game wasn’t restarting.
“There wasn’t one protest.
“I have to thank our fans for their support.
“Even when we lost one player, we kept going, and when we lost two, it was impossible.
“We still had moments, and we had a big opportunity to score with Daniel.
“We were still in the game, we had the better chances, I can’t remember Ben Kennedy having to make one save.
“The real upsetting thing is we lose these two players for our next game, which is totally unfair, so hopefully the FFA will review it, and admit that they weren’t deserving of a send-off, and allow those two players to play in our next game away to Adelaide.
“Hopefully the people who hold the power will bring it to justice.
“We’re disappointed with the way we gave away the two goals, we needed to be better.
“It’s those key moments of the game that you need to deal with.
“I’ve got no arguments regarding that, we were poor in those two moments.
“Other than that, I think we probably could have handled the ball better in the first half, they applied a lot of pressure on us, so I give credit to them.
“Every time we managed to keep the ball we looked dangerous and managed to create opportunities.
“We tried and tried, and kept going with nine men, but it was always going to be difficult,” Okon said.
In response to the controversy caused by the VAR at the Mariners-Wanderers’ clash, the FFA released a statement from the Head of Hyundai A-League and Westfield W-League, Mr Greg O’Rourke.
“We accept that issues related to the Video Assistant Referee (VAR) are currently taking focus off the football, and needs to be much better,” Mr O’Rourke said.
“As part of the worldwide trial of introducing the VAR to our game, the Hyundai A-League has been challenged by consistency of its application,” he said.
“Whilst the protocol framework is clear that it is to be only used in four areas, namely Red Cards, Penalties, Goals and Mistaken Identity, it does not eliminate the need for interpretation in many of those cases.
“The case for its introduction is reinforced when the replays show clear errors, like when the ball crossed the goal line on Friday night, or when players are offside, like a number of the incidents that have been corrected, but is less clear when we get to poor tackles and deciding on whether it should be a yellow or red card.
“Some are very clear but others less so.
“The VAR is set to be introduced in more global leagues around the world next year, and it is a case of getting it right, rather than walking away from the trial.
“Most other Australian sports have been using technology and referees and umpires in the stands or central hubs for many years, and have taken time to improve the systems.
“We are rightfully impatient as a sport to see this perfected much quicker, and that is our aim as well.
“We will make some more changes to the way we approach the use of VAR in time for the next round.
“Contentious decisions by referees have always been talking points, and will continue to be to some degree, with or without VAR, but it is important that game changing decisions have the benefit of the same reviews that the audience have in the stadiums, or at home, to improve accuracy.
“We are all looking for the same thing and that being that Football and our players remain the focus, and not the VAR.
“We intend to deliver on that,” Mr O’Rourke said.