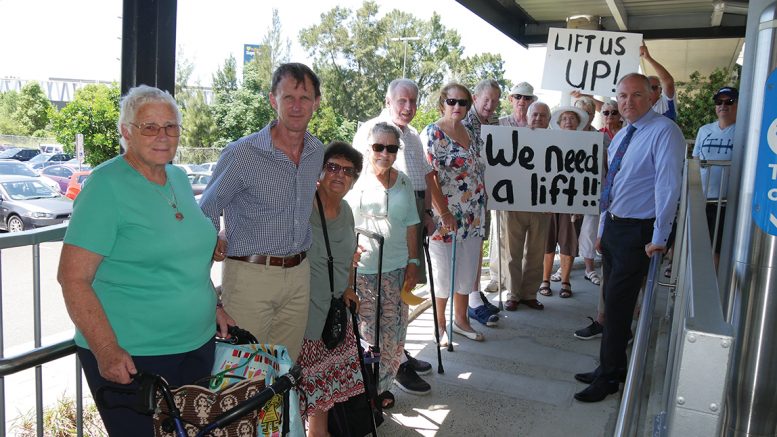 The Members for The Entrance and Wyong met with a group of protesters at Tuggerah Station on December 12.
The group is campaigning for a lift to be installed at the station, following concerns about access for the disabled and those with mobility issues, claiming that the current access ramp did little to help the disabled and elderly navigate the station in time to reach connecting trains and buses.
“Tuggerah Train Station is one of the busiest stations on the Central Coast, and it has been neglected by this government for too long,” Mr Harris said.
“The Premier, the Hon. Gladys Berejiklian, cancelled a proposed lift upgrade in 2011, when she was the Transport Minister, and has never provided a reason,” he added.
The rally was attended by a diverse range of commuters who raised their concerns about disability access and the length of the ramp.
“Residents that attended made it very clear that the community needs and wants a lift at Tuggerah Station.
“The government has so far failed to acknowledge the concerns of locals, despite the fact that the Central Coast is home to a high proportion of elderly and disabled people,” Mr Mehan said.
“This lift was stolen from us, construction had begun before this Government was elected in 2011, and they haven’t gotten any commitment or apology since.
“The government needs to listen to all the people who came to the station today and deliver this essential project for our community,” Mr Harris said.
“This is simply not good enough,” Mr Mehan said.
The funding and infrastructure was prepared in 2011, yet there is still no lift and no reason as to why, by the government.
“I have had residents inform me that they travel to Wyong Station for ease of a lift, even if Tuggerah Station is closer.
“The Government needs to fess up to the fact that they just don’t care about the residents of the Central Coast and aren’t willing to provide the infrastructure to improve the lives of many in our area,” he concluded.

Arrests at anti-lockdown protests at Gosford and Wyong