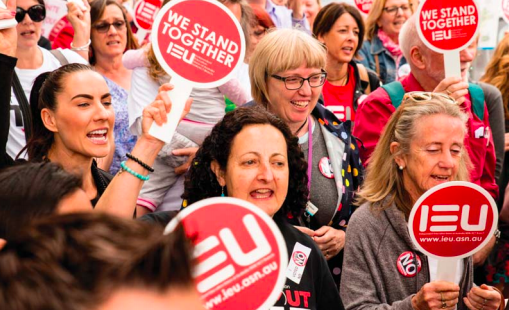 Catholic school teachers and support staff stopped work on Monday, December 4, for four hours, in the latest round of industrial action to protest Catholic school employers’ refusal to strike a reasonable bargain.
A regional rally was also held by the Independent Education Union (IEU) at The Entrance Leagues Club, Bateau Bay.
“The mood of members has lifted, with more than 100 additional schools taking part in this second round of action, following a series of a stop works in early November,” IEU Secretary, Mr John Quessy, said.
Mr Quessy said members were at “boiling point” after employers took the unprecedented action of putting an enterprise agreement to the vote without gaining union endorsement.
The employers’ vote was due to begin on Tuesday, December 5.
“This has never been done before in Australian history.
“Catholic employers are coming for our members’ rights and they will not tolerate that.
“We are urging a ‘no’ vote,” Quessy said.
“It is clear they want absolute power over their employees and the members are standing firm against this.
“Our action is sending a clear message that we reject their enterprise agreement.
“This dispute is not about pay.
“A 2.5 per cent pay rise was settled nearly a year ago, but has yet to be paid.
“Rather, the dispute is about Catholic employers vetoing the right of the union to access the Fair Work Commission for arbitration.
“Details of the enterprise agreement also remain unresolved,” he said.
Mr Quessy said it was outrageous that employers were indicating staff needed to vote ‘yes’ on 5 December in order to get their pay rise.
“Our members will not be held to ransom by employers dangling a meagre pay rise as a carrot.
“Teachers and support staff want their conditions protected by their enterprise agreement and by the Fair Work Commission.
Ms Carol Mathews, Assistant secretary of the IEU NSW and ACT said around 250 teachers were impacted on the Central Coast and around 50 attended the stop work rally.
“The union is opposing the enterprise agreement and we believe there will be a strong no vote against the EI, we believe that will result to a resumption of negotiations,” Ms Matthews said.
“The union is very unhappy that the employers put to the vote of employees an enterprise agreement not endorsed by the union and the reason why it was not endorsed is there is no right to enforce the agreement through the Fair Work Commission,” she said.
“The only way to enforce it would be through the federal court.
“The agreements that existed for many years on class sizes, face to face teaching and other conditions related to teachers’ duties can now be revoked by the employers.
“It is a very big step backwards and our members are very unhappy that they are being held to ransom that if they don’t vote yes they will not get a pay rise.
“The Catholic Schools are pushing a right wing employer agenda to take away rights from employees in Catholic Schools even though Catholic employers have always stood for Catholic social justice and the rights of workers.
“We will be calling on members early in term 1 to see if there has been any progress and if there has not been there is the chance of more industrial action in the new year, in February, and it could be more widespread.”
Wyong Regional Chronicle asked the Catholic Diocese of Broken Bay to comment on the statements made by the IEU but they had not responded by the time of going to press.

The life of silkworms