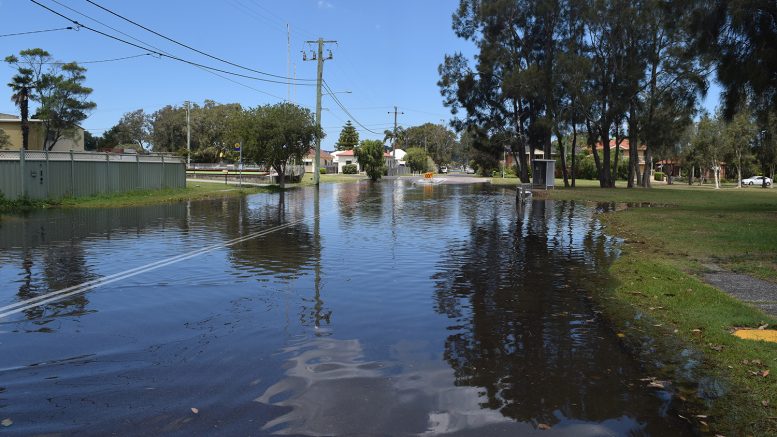 More than 50 submissions have been lodged with Central Coast Council objecting to the proposal to redevelop Sporties at Woy Woy on the corner of Brick Wharf Rd and North Burge Rd, Woy Woy.
The number of objections is expected to result in the application being considered in an open council meeting.
Objections have been made on the basis of flooding, zoning and land use, height and floor space.
“Building a retirement complex on perhaps the worst intersection for flooding in Woy Woy can only be inappropriate,” one objection to the development lodged with Council stated.
“In the seven years I have lived in the area the intersection and surrounds have been flooded and witches’ hats on the roadway on quite a few occasions,” it stated.
“Where the State Government dictates that certificates of title for the surrounding residential properties must include a caveat that they are in areas subject to potential flooding due to climate change, the Council has a multi-storey development proposal for the elderly which includes a basement carpark,” it said.
“One wonders if a permanent bilge pump is to be located in the carpark.
“The land is around one metre above sea level which means that any slightly higher than usual tide would have the proposed development in its sights, let along freak events or future planning for climate change.”
Many other submissions objected on the basis of flooding and stormwater issues.
“Today, December 5, a large spring tide flooded the surrounding area over the roads,” one such objection said.
“The source of this flood water was the stormwater drain that is meant to be used to extract rainwater from the development,” it said.
Other objections were made on the basis of zoning, land use, and excessive height and floor space.
“The rezoning of the R2 land which will occur as necessary for this development will ultimately extend to the remainder of the properties on this waterfront stretch which is bounded by parkland and recreation areas on either end,” another objection stated.
“This would ultimately destroy the ambience of the area and inevitably lead to the type of development inappropriate for this area,” it said.
“The DA is not appropriate for the stated recreational use of the land as stated by Gosford Council and will inevitably impinge on its availability to the rest of the community (for example Scouts, boaties, picnickers etc).
“The DA is particularly unsustainable as the height and floor space ratios are much higher than the surrounding low-density residential area.
“Traffic is particularly heavy at certain times and the DA shows traffic and parking deficiencies for the development which is intended there, namely retail, 63 units and a licenced club.
“It would indicate that the traffic studies undertaken were not adequate for this proposal.

“The four-storey development planned which will cover most of the site has significant shadowing issues for residents and the general public in the park and on the walking path to the west of development.
“This development will result in loss of many recreational facilities such as the fishing club and three outdoor bowling greens, parking will be chaotic, there will overcrowding in many ways of a green open facility on the waterfront, shadowing will be significant and the whole development makes a mockery of the whole recreational purpose and use of the waterfront at this end of Woy Woy.”
“I object to the notion that it would even be possible to have an underground car park in this area,” another submission writer said.
“Engineering wise it may be feasible. In practical terms, we flood consistently even without storms. I fear that an underground car park would actually be a danger to life in this area.
“Stormwater cannot dissipate through the current stormwater system as it is, the removal of the greens would take away any chance of natural seepage.
“I strongly object to the Lot currently zoned R2 being rezoned to allow development on this lot.
“This would set a terrible precedent for the properties in this area and would put the Council under pressure to rezone and allow other multi storey developments.
“The consequence of this to the area is significant.
“Lastly I object to development of the block of land that was previously Crown Land.
“This should never have been sold by the Crown to a private developer for development purposes.
“Crown Land is for the benefit of the community, not the profit of the few.”