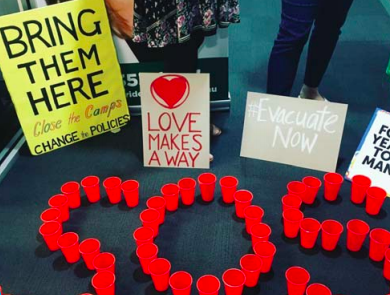 Representatives from the Central Coast for Social Justice group peacefully protested the treatment of the refugees on Manus Island in front of the Federal Member for Dobell, Emma McBride’s, office on Wednesday, November 22.
The small group read a program that acknowledged the experiences of refugees from the island.
“There are many untruths being said about this situation, so I encourage everyone to talk to friends and family about what is really going on,” said group spokesperson, Ms Danielle Habib.
Central Coast for Social Justice (CCFSJ), a Facebook group with over 800 members, organised the event in light of the recent political refugee crisis that has seen the Manus Refugee Camp shut down.
CCFSJ is a community of people committed to constructive and informed conversations about social justice, with a particular focus on the asylum seeker policy.
They use their Facebook platform to promote events regarding social justice and also to encourage the community to push their voices further.
“A conversation at the peace vigil at Emma McBride’s office led me to the realisation that we need to extend our conversation to the youth of our community, and to those who run the media surrounding this issue,” said Samantha Taylor, a group member of the Central Coast for Social Justice group.
The event concluded with a short conversation with Heather Robinson, Emma McBride’s Office Manager, in which she thanked the group for speaking up on an issue that is often overlooked.

Councillor complains of intimidation and harassment