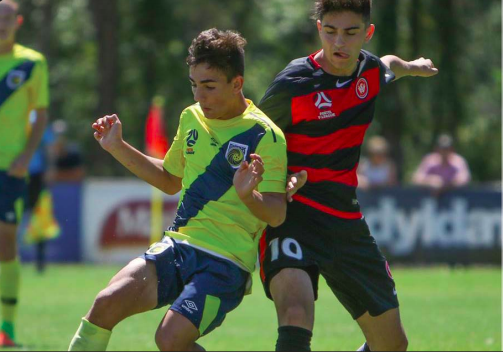 Unable to claim their third victory in a row against Melbourne City FC on Sunday, December 10, the Central Coast Mariners will be hoping for a win in front of their home crowd when they clash with the Western Sydney Wanderers at Central Coast Stadium on Saturday, December 16.
The Mariners have already faced the Wanderers this season where they locked horns in a hard fought 2-2 draw.
In that match, both Asdrubal and De Silva found the back of the net.
It was round two and the first real taste of Danny De Silva magic, who scored a wonder goal and earned man of the match honours.
Now in the middle of the Hyundai A-League table, with a goal difference of -1 and 12 points, the Mariners could easily move in either direction, so it will be important to come away from the pre-Christmas home game with at least a point.
The statistics from the 18 games played between the Mariners and the Western Sydney Wanderers since 2012, when the Wanderers joined the competition, are reasonably even.
The Mariners have won five, drawn six and lost seven of the games against the Wanderers.
Overall, the Central Coast Mariners have been in better form than the Wanderers in the past five A-League rounds.
The home side has won three of its last five games and lost two.
The Wanderers, who are currently second last on the table, have lost three and drawn two.
At the time of going to press, Coach Paul Okon had not named his squad for the imminent clash, so it was not clear whether Storm Roux was fit for selection or whether or not Asdrubal would be back from injury.
Tom Hiariej’s absence in the game against Melbourne City was also pivotal and his status for the Wanderers’ match was unclear.
In the lead up to the match Andrew Hoole commented that it would be his 100th in the A-League.
“Hopefully this weekend with Western Sydney we can get back to our winning ways,” Hoole said.
Hoole said he agreed that Tom Hiariej was an important player in the middle of the field.
“It comes around really quickly so soon it will hopefully be 150,” Hoole said of reaching the 100-game miletone.
“You just take each game as it comes, play each game and you don’t really keep tally itself but it is a nice achievement,” he said.
Hoole said he believed the Wanderers’ 5-0 loss against Sydney FC in round 11 was a “drubbing” and very difficult to come back from.
“So they are coming to the Central Coast to get three points and we are looking to get back to our winning ways as well so it will be a good game,” he said.

Terrigal junior makes a dream start for the Mariners