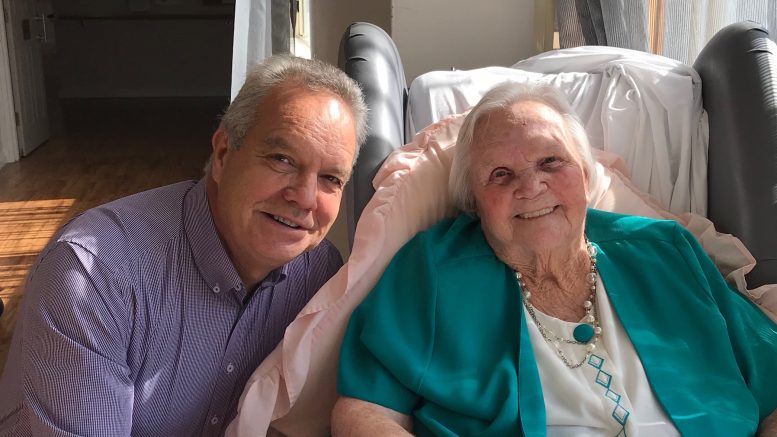 Dot Devine at Don Leggett House on her birthday

Umina nursing home resident Ms Dot Devine turned 104 on Friday, celebrating with friends, family and staff.
Dot has lived through the Great Depression, both World Wars and the reign of 24 Australian Prime Ministers.
Dot was one of nine children, is the mother of two daughters and is both a grandmother and great grandmother.
“As one of nine children, we had to do many things around the house and especially so as I was predominately raised by my mother as my father died when I was just seven.
“After raising my two daughters, I also raised my two grandchildren from age four and five which kept me young and active,” said Dot.
She worked as a machinist, making lounges and mattresses in the late 1930s.
Dot outlived her husband Henry but continued with an active life.
She was an active volunteer doing charity work for Meals on Wheels and Legacy in her older age.
“I loved working and had a great interest in sewing and knitting once I had children.
“I was also a champion dart player and enjoyed playing tennis and have a fond interest in watching the professional tennis tournaments as well as listening to Judy Garland,” she said.
Dot said she was not sure about the secret to living a long life but thought it came down to keeping the mind active.
“I have always had a strong passion for reading and love a good crossword challenge,” said Dot.
Dot celebrated with a special morning tea with other residents members of her family.
Peninsula Village gave her a chocolate bouquet and huge cake for everyone to enjoy.
“Dot is a special resident at Don Leggett House and one who brings a smile to the faces of other residents and our staff on a regular basis,” said Peninsula Villages chief Mr Shane Neaves.
“While Dot wanted a quiet affair it was only fitting to ensure that we marked this incredible milestone with a few sweet treats.
“Our centenary tradition is to give our residents a bouquet of flowers representative of their age, but with Dot receiving a huge bunch of gerberas for the last four years, we reverted to one of her favourite things, some good quality chocolate,” he added.