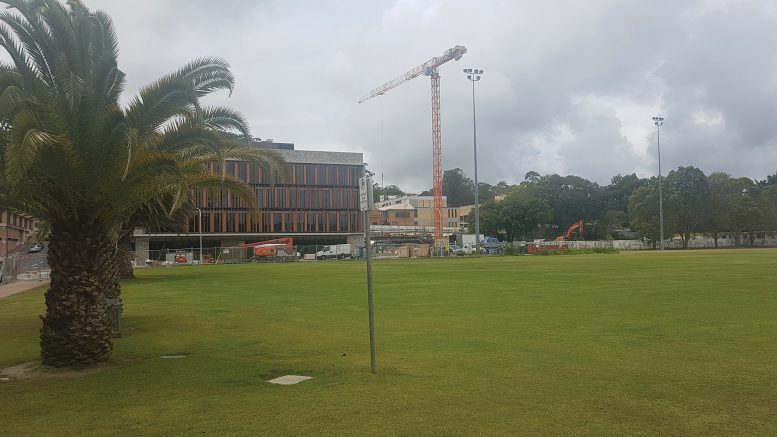 Looking across Leagues Club Field which has been chosen as the preferred site for the Regional Performing Arts Centre in Gosford Photo: Justin Stanley

The naming of Gosford’s Leagues Club field as Council’s preferred site for the Regional Performing Arts and Conference Centre, has been listed as an economic achievement in Central Coast Council’s annual report for 2016-17.
Another economic highlight listed was the successful appointment of The Affinity Partnership to partner with Council to deliver tourism marketing and industry services to the region.
Sponsorship, funding, grants, contributions and donations made by Council in the former Gosford Council area totalled $749,743 for the reporting period.
Council spent $2.46 million on sponsorship, funding, grants, contributions and donations in the former Wyong Council area during the same reporting period, including $1.02 million on The Art House Wyong.
The Administrator incurred fees and expenses totalling $420,539 for the period May 2016 to June 2017, including “other costs” of $65,101.
According to the annual report, the remuneration of the CEO was $461,017.37, and the remuneration of senior staff for the reporting period was $7.6 million, including senior staff from the former Gosford and Wyong Councils, as well as the amalgamated Council.
“In the Central Coast Council structure, unit managers are now under the Local Government State Award, and therefore the senior staff remuneration for the next reporting period will be lower,” the annual report said.
An amount of $12,150 was paid to barristers and agents engaged on behalf of Council in legal matters listed as related to “trusts of the former Gosford City Council”.
Governance and leadership highlights listed included the development and delivery of a new Community Engagement Framework that features a diverse range of avenues for community to have their say, with a focus on place-based engagement.
Live webcasting of Council meetings for the first time, with the installation of fixed cameras at Gosford and Wyong Chambers, was another governance and leadership achievement itemised, according to the annual report.
The launch of an interactive online map to help inform and keep residents up to date on road projects happening in their area was also listed as a key governance and leadership achievement.
Council would usually be required to include audited financial statements in its annual report.
“However, the need to consolidate financial data from the former Gosford City and former Wyong Shire Councils has resulted in additional complexities, and time is required to complete the 2016-17 financial statements.
“The NSW Office of Local Government, in consultation with the Audit Office of NSW, has extended the deadline for Council to submit the audited financial statements.”
As the annual report will be adopted prior to the December 31 extension deadline, the audited financial statements will form an addendum to the annual report, following adoption by Council.
In accordance with legislative requirements, the audited financial statements will be presented at an Extraordinary Council Meeting on Thursday, December 7.
According to the annual report, the employee headcount at the combined Central Coast Council is 2,396, 80 per cent of whom live locally, and over 26 per cent have 15 years or more length of service.
Overall achievement to targets within the Council’s Operation Plan included 228 projects completed, five on target, five behind schedule, two deferred and 33 closed.
The annual report structure reflects Council’s quadruple bottom line of community, environment, economy, and governance and leadership.