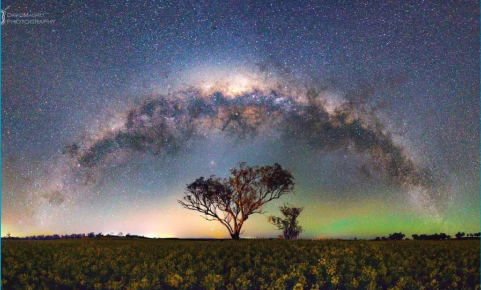 Coasties looking for an interstellar experience should set their sights on Glenworth Valley, according to 2017 Exposure Photographer of the Year, Mr David Magro.
From December 13-14, one of the most prolific celestial events will take place in the form of the Geminids Meteor Shower.
The Geminids is the result of the Earth passing through the debris of the Phaethon 3200 asteroid and is hailed as one of the most reliable and vivid meteor showers to spectate.
Radiating from near the bright stars Castor and Pollux in the constellation Gemini the Twins, the Geminid shower is one of the finest meteors showers visible in either the Northern or the Southern Hemispheres.
In 2017, moonlight is not predicted to impact the spectacle, as it did in 2016, as the moon will be a waning crescent, making for excellent conditions.
The meteors are plentiful, rivalling the August Perseids, which is the Northern Hemisphere’s most iconic and consistent meteor shower.
They are often bold, white and bright.
On a dark night, you can often catch 50 or more meteors per hour.
The greatest number of meteors fall in the wee hours after midnight, centred around 2:00am, according to space and astronomy researcher and educator for EarthSky, Ms Deborah Byrd.
The Geminids should be visible to the naked eye across the Central Coast, but areas with high vantage points and minimal light pollution will make for the best viewing.
Mr Magro has chosen Glenworth Valley Outdoor Adventures to capture the 2017 shower, and will also be presenting a free night-sky photography workshop for Glenworth Valley campers from 7pm on December 9.
This workshop is suitable for amateur photographers of all ages and will demonstrate the skills of night-sky photography, including post-production techniques.
“The Geminids is always a visual treat to experience and document, and this year I wanted to bring that experience to more people through my workshop,” Mr Magro said.
According to Mr Magro, astronomy, space travel and all things celestial, have become much more concurrent throughout mainstream society and this has spurred on a new interest in night photography.
“People always tell me that they’ve never seen a shooting star and I think that’s just crazy when you think about how much cool stuff is out there and above us all the time, and I think now that astronomy is more tangible to people, they want to get out there and experience it.
“That’s what the workshop’s for, to get them out there with me and to teach them some of the skills they need to get them started, and the Geminids is probably one of the best events to give people a taste for it,” Mr Magro explained.
“With most showers, you can be lucky to see maybe 10 to 20 meteors per hour, with the Geminids there’s usually 50 to 120 giant, blazing fireballs streaking through the sky.
“It’s always amazing, but with no lunar interference this year, it’s going to be really special,” he added.
Mr Magro said his workshop would coincide with the showers’ projected peak of December 13-14, meaning attendees will have time to learn and practice their night photography skills with Mr Magro on the 9th, before the Geminids peaks.
Local astronomer, Mr Andrew Murrell, will also be at the workshop to share stories of the night sky and solar system, and will have a giant Dobsonian Telescope on hand for an unforgettable view of the meteor show.
Attendees should bring their own DSLR camera, lens and tripod to take part.
For locals wanting to watch the shower but who can’t attend Mr Magro’s workshop, he said: “The Valley is definitely one of the best spots to watch the shower, but another great spot on the Coast for celestial viewing is Mangrove Mountain, but anywhere with a clear sky and minimal light pollution will make for a good show.
“Beaches also make for fantastic viewing and photo opportunities for the Geminids, but you can even watch it from your own backyard, provided your conditions are good,” Mr Magro said.
Mr Magro’s final tip for this year’s event was to make sure you give yourself plenty of time to prepare, even if you are just planning on watching the shower.
“Give your eyes some time to adjust to the dark, it really helps,” he said.