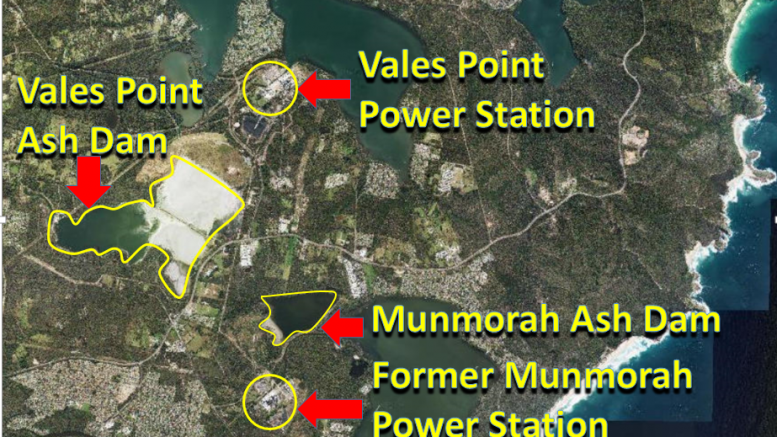 An EPA supplied map showing the location of the ash dams near Vales Point Power Station and the former Munmorah Power Station. Archive 2017

The unlined, 40-year-old, ash dams at Munmorah and Vales Point Power Stations, cover a total of 436 hectares but, according to the NSW EPA, they are monitored carefully.
Mr Gary Blaschke, from the Northern Lakes Disability Tourism Precinct, has called for an environmental and health audit, and argued that the ash dams pose a risk to both.
The EPA confirmed that it had met with a representative of the Norther Lakes Disability Tourism Precinct, and said that they would be happy to do so again.
“When coal is burnt to generate electricity, the residual ash is collected,” a written statement from the EPA, responding to questions from the Wyong Regional Chronicle, said.
“Much of this ash is reused in the cement industry, but the remainder is disposed of in ash dams,” the statement said.
“Coal ash disposal is carefully regulated by the EPA through Environment Protection Licences held by power station operators.”
According to an environment compliance report on coal ash dams in NSW, produced by the EPA in 2016, the composition of coal ash varies, depending on the composition of the coal burnt.
Ash is produced from two sources in the electricity generation process.
Fly ash is the particulate matter produced in gas streams from the combustion process and captured by electrostatic precipitators or fabric filters.
Bottom ash is the ash extracted from the bottom of the boiler.
“Ash is composed of modified coal mineral matter, primarily compounds of silicon, aluminium, iron, calcium, manganese, potassium, sodium and titanium, which form a matrix for traces of compounds of other metals.
“Ash composition depends on the coal properties, combustion technology and combustion conditions.
“The ash is transported to ash dams as a slurry or paste,” the audit report explained.
According to the EPA, Vales Point Power Station’s ash dam covers 360 hectares, and is located to the west of the Power Station.
Munmorah Power Station’s ash dam covers 76 hectares, and is located to the north of the Power Station.

While Munmorah ceased operation in 2010, the EPA is still regulating the site, including the ash dam, the statement said.
“Both Vales Point and Munmorah Power Stations have used ash dams since they commenced operation in the 1960s.
“Due to their age, the ash dams are not lined and, as is standard practice with unlined ash dams, the EPA requires monitoring of surrounding groundwater.
“In 2011, there was an unauthorised discharge of water from the Vales Point Ash Dam.
“Delta undertook additional earthworks to minimise the risk of further overflows, and following an EPA investigation and assessment, the EPA modified the Environment Protection Licence.”
Wyong Regional Chronicle has subsequently asked the EPA to clarify how the licence was modified.
“In 2013, a high pH discharge from the Vales Point Ash Dam occurred during extreme wet weather.
“At the time, the EPA was already considering a request from Delta to increase the pH discharge limit, which was approved, after the EPA was satisfied that the environment and community’s health would be protected.”
In other words, Delta was allowed to discharge to a higher pH limit without it being considered unacceptable by the EPA.
Monitoring of surface water discharges from the Vales Point Ash Dam (Mannering Lake), shows minimal impact on Wyee Creek, according to the EPA.
Monitoring of the Munmorah Ash Dam (known as Colongra Lake), before Munmorah Power Station closed, showed that discharges from the ash dam were not impacting on the Tuggerah Lakes, the statement said.
During high flow periods, discharge from the ash dams flows into Lake Macquarie.
“Discharges during high flow periods have been assessed as having minimal environmental impact on Lake Macquarie,” the EPA statement said.
All discharges from the Vales Point Power Station licence are monitored closely and assessed for environmental impact, the statement said.
Delta Electricity’s licence was transferred to Sunset Power International Pty Ltd, on December 8, 2015.
The EPA removed a Pollution Reduction Program from the licence in August, 2016, as Delta had met the requirements of the program in October, 2015.
The licence was also varied to permit small increases in water temperature that could be discharged to Lake Macquarie from the Vales Point Power Station following assessment of the likely impacts on seagrass.
There have been various other administrative changes to the licence since it was transferred to Sunset, according to the EPA.
EPA guidelines recommend final capping of landfills, include a layer of 600mm of compacted clay, to prevent infiltration of rainfall.
When asked whether the EPA considered annual monitoring sufficient, it responded: “The monitoring requirements are appropriate for their purpose.
“Vales Point Power Station is required to monitor some air quality parameters annually, but other parameters are monitored more often.
“For example, groundwater quality around the ash dam must be monitored every quarter.”
The EPA regulates ash dams across NSW under the conditions of Environment Protection Licences, rather than bonds, to ensure that the surrounding environment is protected.
“As such, no bonds or rehabilitation costs have been collected under the licence for Vales Point.”
Wyong Regional Chronicle asked the EPA for access to the results of seagrass monitoring over the past decade, as a way to verify its statements about the impact of the ash dams on the local ecology.
The EPA responded: “Monitoring data, which is required as part of Vales Point’s Environment Protection Licence, shows no significant change in the overall area of seagrasses from summer, 2009, to summer, 2015, within the vicinity of the Power Station’s inlet or outlet canals.
“Copies of seagrass monitoring may be available under GIPA.”
A compliance audit of the Vales Point Power Station’s coal ash dams was conducted in August 2016.
According to the EPA: “The audit found that water levels in the dam were not being managed as efficiently as they could be, and Vales Point have since developed an action program to address all identified non-compliances.”
The EPA decided to audit the state’s coal ash dams following changes made by the United States Environmental Protection Agency.
In December, 2014, the US EPA released a set of standards covering ash dams used to store coal ash from power stations in the United States of America.

The standard was initiated after a large coal ash spill in 2008 at a power plant in Tennessee.
The spill flooded more than 300 acres of land, destroying houses and releasing coal ash into waterways.
“Considering this rule, the NSW EPA determined it would be appropriate to review the management of coal ash dams… in NSW.
“Coal ash dams and emplacements have not previously been audited under the EPA’s sector based audit program, or been included in recent focused compliance audit programs,” the audit report said.
It described coal ash dams as essentially tailings dams.
“The primary objective is for the ash and stored water to remain contained,” the report said.
The Australian National Committee on Large Dams (2012) outlined the primary objectives for the design of a tailings storage facility as including: the safe and stable containment of tailings and contaminants; the safe management of decant and rainfall runoff; and, the management of seepage.
However, the dams on the Central Coast, due to their age, are unlined, so their ability to contain tailings and contaminants is questionable.
“Environmental harm associated with tailings dams includes: uncontrolled release of the tailings and/or water by collapse or failure of the dam embankment; uncontrolled release of pollutants through discharge over the spillway or seepage; operational failure, such as through pipe burst or pump failure; and, emission of dust,” the audit report said.
The audit report concluded that the ash dams involved in the study had an 86 per cent compliance rate.
Of the non-compliances, 2 per cent were code orange, which meant they had either a high or moderate environmental impact, and a likelihood of environmental harm, ranging from low to certain.
Another three per cent of the non-compliances found during the audit were rated code yellow, meaning their environmental impact was rated low or moderate, and their likelihood of causing environmental harm ranged from likely to less likely.
Nine per cent of the breaches were code blue, which meant they related to administration or processes that did not have an environmental impact, but endangered the integrity of licence compliance.
The audit report did not name the breaches found at specific sites.