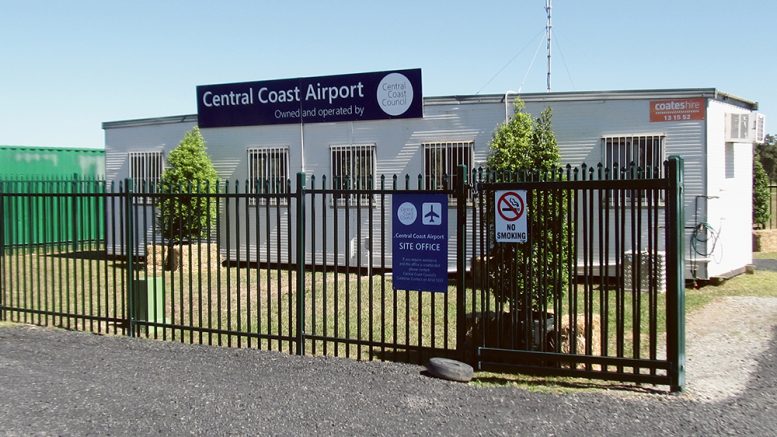 A new community association will be established, supported by a facebook page, dedicated to winning public support for the expansion of the Central Coast Airport.
A Central Coast Council staff proposal to expand the airport into a general aviation hub and potentially further expansion into a jet airport, was voted down by Central Coast Councillors at their November ordinary meeting.
John Codrington, a businessman, registered federal lobbyist and avid pilot, has been a member of the Central Coast aero club for 20 years, but does not speak on behalf of the club.
He spoke to the Wyong Regional Chronicle to express his concerns about the position taken by the Councillors.
Mr Codrington said he was currently engaged as a business consultant by a company looking at locating its aviation-related business at the Warnervale site.
“The people I am acting for at the moment, because of what is going on, have other opportunities going on in places other than the Central Coast.
“I can tell you that with these particular people, the growth of the particular brand of aircraft they are bringing into Australia has grown substantially over the last four to five years.
“They currently have facilities in Queensland and Perth, but the great percentage of people buying the particular brand of aircraft are located in NSW and Victoria.
“The manufacturer requested that they open up a facility in NSW, and the logical place would be Bankstown, except that with the cloud hanging over Bankstown, and the commissioning of Badgery’s Creek International Airport within five to six years, these people are being asked to stump up a fair amount of money for investment, and they are saying, hang on a minute, if Bankstown is shut down or curtailed, do we want to spend this money in Bankstown?
“They could go to Camden, but it is not easy to get to, while the Central Coast Airport is attractive because it’s one minute off the M1 and the train station at Warnervale.
“It is attractive for aircraft sales and servicing and the opportunity to assemble aircraft.
“At the moment, the aircraft are flown out brand new, and that is how most of them get delivered, but the cost of ferrying an aircraft from the US to Australia will burn up 60-70 hours of flight time.
“For a fraction of the cost, you can break the aircraft down, ship it to Australia, unload and assemble it here.
“That is a possibility that could come here, if Council hasn’t burnt it already.
“That is more jobs and it is not a big facility.
“You are not talking about dozens a month, but one or two a month, but it still employs half a dozen people plus ancillary staff, plus avionics.
“If you look at the Expression of Interest that was done this year, there were 137, I believe, solid expressions of interest, and I believe there have been 34-35 memorandum of understandings, (as verified in Council documents made public) providing it gets the go ahead, from businesses wishing to relocate to the Central Coast,” he said.
“My major concern is the vote that was passed at the Council meeting, which does not show complete transparency for the process, which in my view is important enough, and must be released for the constituents, ratepayers and residents of the Central Coast to view and make up their mind,” Mr Codrington said.
“The airport is not the plaything of the Councillors, it is not the Councillors’ airport, it is actually owned by the residents of the Central Coast,” he said.
“You own the land at the moment, the land the aero club sits on is owned by the aero club, but the rest of the land, including the runway and surrounding area, is owned by the Council.
“The aero club pays a lease, the new amphibious repair and restoration business coming in will obviously pay lease fees.
“There are landing fees on any itinerant aircraft that use the facility, except if they are emergency services.
“We even had a fire spotting aircraft from NPWS land there last weekend, while they were doing a mission west of the Central Coast, fire spotting, so it is quite a busy little hub now.
“The aero club itself has done a magnificent job of creating interest in the facilities.
“Its membership base has grown.
“Its training facilities have improved immeasurably, including its aircraft maintenance facility, which has increased its revenue sizeably in the last 12 to 18 months.
“There has been a lot more interest created in the facility now that Badgery’s Creek has been announced.
“The reason being, the air space that Badgery’s Creek takes up, decimates the training area that Bankstown has access to.”
Mr Codrington said Bankstrown’s designated area for pilot training extended west of Bankstown to Prospect Reservoir, out to Penrith, but the commissioning of Sydney’s second airport at Badgery’s Creek would take that airspace away from Bankstown.
“So training schools that they have on the site of Bankstown, will have nowhere to go for their training exercises, or they will spend half an hour to get somewhere, and a half an hour to get back, so students will spend one hour cost of flying time without being able to do any training.
“Bankstown is becoming almost like another Essendon to Tullamarine.

“Essendon no longer conducts any training flights, it is essentially the charter hub for Melbourne airport, and Bankstown will have the same issue soon in my view.
“The only other real facility that is accessible to the city people is Camden.
“We no longer have Schofields, we no longer have Hoxton Park.
“So we now have an opportunity for the Central Coast Airport to be able to take business or have business relocate to the Warnervale site, bringing in much needed investment into the area.”
According to Mr Codrington, the Council staff’s proposal for the airport fits in with the Wyong Employment Zone, because it is specific, high-end industrial businesses that would be attracted.
“It will bring employment to the area, and employment generates all sorts of other opportunities for small business in the area.
“Most of the businesses don’t need a longer runway,” Mr Codrington said.
“If it is light aircraft coming in for service and maintenance, the runway is sufficiently long enough, it doesn’t need to be extended, and it will cover, in my view, 95 per cent of business coming through, because it is a general aviation hub.”
Mr Codrington said he did not support the full expansion of Central Coast Airport as a regular public transport jet airport, even though that was part of the plans presented to the Councillors for their consideration.
“Everyone is talking about jet aircraft and jet engines, lots of noise, and lots of hot air,” he said.
“You’ve got to remember that this is a proposal and there are a number of different sections in it, and it doesn’t mean that every section has got to be accepted, this is why it has got to go to the general public, then it is up to the general public to make that determination.
“The concerns that have been bandied around is that we are going to have a jet airport here, that we are going to have 747s and 737s.
“That is misinformation, because we don’t have the space for it, and we don’t have, and will not have for generations, the population base to ever sustain something like that.
“Arguments over flightpaths are furfies, because you are never going to have a jet airport such as Newcastle, why would you bother?
“But as a GA hub, perfectly spotted close to the M1 and railway station, people who have an aircraft can fly the plane in and jump on a train back to the city, or go across to Terrigal or the Entrance and spend some time playing in the sun while their aircraft is being serviced.”