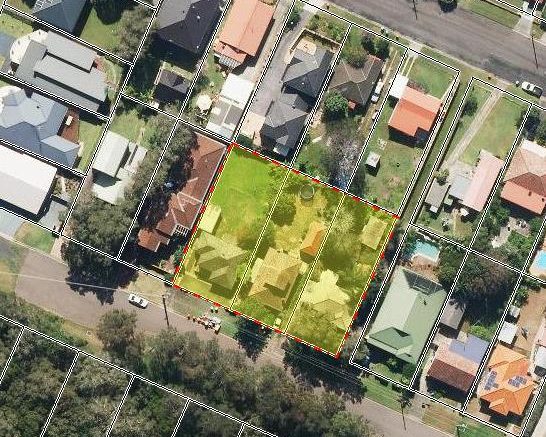 An aerial view of the site

Central Coast Council is assessing an application to develop a residential flat building consisting of 29 units at 6 to 10 Battley Avenue, The Entrance, under the Affordable Rental Housing State Environmental Planning Policy.
The development was lodged in June, has a value of $7.5 million, and will be determined by the Joint Regional Planning Panel.
The site was the subject of an approved DA for a residential flat building containing 21 units.
The proposal was approved under delegation in September, 2015.
The previously approved footprint has been used to inform the proposed design for the new proposal.
The design approach was to maintain the approved setbacks where possible, with some additional articulation and encroachments, to accommodate the affordable rental housing gross floor area bonus, while maintaining acceptable amenity impacts that are consistent with the previous approval.
The previous design also included a minor height breach and the developer has argued that the justification for the variation in that instance remains valid for this proposal.
The proposed development will contain six one-bedroom units, and 23 two-bedroom units.
The units will be of a mixture of floor plates and be primarily orientated to the front and rear boundaries.
Three ground-floor units will be adaptable.
A total of 17 units will be allocated as affordable rental housing, pursuant to the State Environmental Planning Policy (Affordable Rental Housing) 2009.
All units will have access to areas of private open space.
For ground floor units, the private open space is in the form of terraces, while the levels above the ground floor units have individual balconies, accessible from the living areas.
Communal open space is provided at ground level and on Level 3, in the form of a roof top terrace.
The subject site is currently zoned R3 Medium Density Residential, and adjoins land zoned R2 Low Density Residential to the west, and is diagonally opposite land zoned E2 Environmental Conservation.
The Site is affected by Class 5 acid sulphate soils, while no other natural hazards apply.
There is a significant slope across the Site, with a variation of 5.24m from the south east corner to the north west corner of the Site.
Number 2 Norberta St, The Entrance, is a large property located directly opposite the Site, that is currently under construction to accommodate a four storey residential flat building containing 46 units.
Approval was granted for this development despite noncompliance with the development standard for height.
According to a Statement of Environmental Effects submitted in support of the DA: “The proposal is generally consistent with the relevant planning controls.
“The proposal seeks approval to vary the development standard for height and the provisions of Clause 4.6 of the Wyong Local Environmental Plan 2013.
“Generally, the proposal represents a well-considered modern design, which will provide additional housing in an accessible location with no adverse amenity outcomes.
“The proposal is consistent with the objectives of the zone and will be a positive addition to the built form of the area.”

Council Public Inquiry hearings over but no timeframe for report