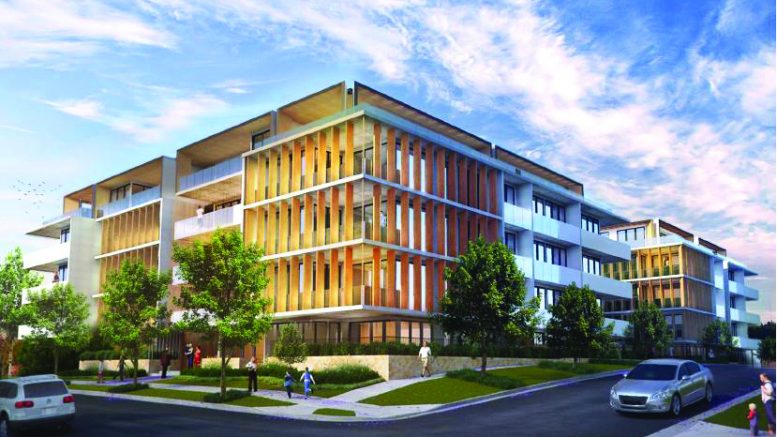 An artist's impression of the revised residential development

The Joint Regional Planning Panel (JRPP) has approved the $34.5 million ‘Three Towers’ residential flat development at 177 Albany Street, Point Frederick.
The matter was deferred in May, followed by the submission of revised architectural and landscape plans.
The original application had garnered 104 submissions from the community, and a further 58 submissions were made to the amended plans considered by the JRPP in May.
The amended plans that were the result of the JRPP referral were not required to be exhibited.
An assessment report prepared by Central Coast Council recommended JRPP approval of the revised development with conditions.
The 5,114 square metre development will include 101 units (revised down from111) and will take in 177 to 181 Albany St, 8 to 10 Duke St and 2 to 4 Auburn St, Point Frederick.
A 7.7 per cent variation to the maximum building height standard in the Gosford Local Environmental Plan (LEP) 2014 was required to permit the proposed development.
The approved proposal will comprise 20 one-bedroom and studio units, 42 two-bedroom units and 39 three-bedroom units, two basement levels of parking for 147 vehicles, 42 bike spaces and seven motorcycle spaces.
The development will have a height of five storeys and driveway access from Duke and Auburn St.
The development will be divided into three buildings.
Building A will be located on the corner of Duke St and Albany St and will contain 37 units.
Building B will be located on Duke St with 36 units, and Building C will be on Auburn St with 28 units.
The development will be built on seven adjoining lots, two that front Auburn St, two that front Duke St and three that front Albany St.
It will replace older single and two-storey houses which have been progressively demolished under separate Complying Development Certificates.
Both the JRPP and Central Coast Council attempted to require the developer to incorporate an ‘isolated block’ at 6 Auburn St into the development, but the owner has confirmed no interest in selling the property.
The developer’s resubmitted plans addressed JRPP and Council concerns about setbacks by relocating Buildings A and B westward towards Albany St.
According to Council’s subsequent assessment report: “This is supported and is considered to satisfactorily mitigate the amenity impact on 12 Duke St.
“The applicant has taken into consideration and responded to JRPP reasons for deferral,” the assessment report concluded.
“In response, amended plans have been provided to refine the design and minimise impacts.
“The applicant has chosen to address concerns raised with the impact of the development at 12 Duke St by moving the driveway 1.5 metres away from the side boundary and providing noise attenuation/landscaping along the side boundary.

“The Building B setback to the eastern boundary was increased from six metres to 7.5 metres, providing greater separation between the proposed building and driveway and the adjoining development at 12 Duke St.

“This reduces the impact on the adjoining development and permits additional noise attenuation measures and landscaping to be provided.
“The resultant impact on 12 Duke Street is not significant and is considered reasonable.
“The proposed amended development generally complies with the GLEP 2014 and GDCP 2013, except for the maximum building height, maximum floor plate and side/rear setbacks.
“However, the variations are minor or have no significant additional impacts on adjoining properties.
“The issues raised in public submissions are addressed by the amended plans or do not justify refusal of the proposal.
“The contention raised in submissions, that the road system cannot cater for the traffic generated by this and other developments in the area, is not supported by the traffic report and comments from the RMS.
“The impact of overlooking of the adjoining properties can be addressed by the provision of planter boxes and/or privacy screens.
“At ground level, there is significant landscaping along the boundaries to protect privacy and amenity.
“This application has been assessed under the heads of consideration of section 79C of the Environmental Planning and Assessment Act 1979 and all relevant instruments and policies.
“The potential constraints of the site have been assessed and it is considered that the site is suitable for the proposed development.
“Subject to the imposition of appropriate conditions, the proposed development is not expected to have any adverse social or economic impact.
“It is considered that the proposed development will complement the locality and meet the desired future character of the area.
“The development site is in an area nominated to grow in population and density into the future.
“Accordingly, the application is recommended for approval.”