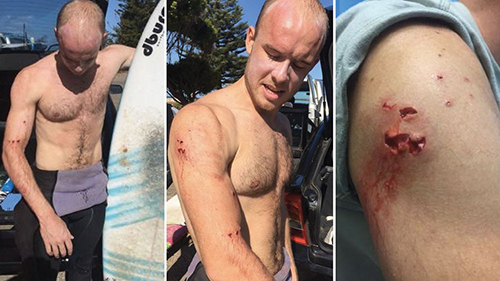 A surfer has been injured while surfing at Avoca Beach on Monday, November 13, after being hit and bitten by what he described as a two-metre shark.
Dr Charlie Fry, a British doctor, at about 4:00pm, Monday, November 13, was surfing with three others, between 20 and 40 metres offshore, when a shark jumped out of the water and hit him in the right shoulder
In a moment of quick thinking, Dr Fry said he punched the shark in the face.
Fry was taken to Gosford Hospital by his friends after he sustained scratches and a puncture wound.
His injuries were not considered serious.
A three-metre shark was located in the surf zone at Avoca a short time after the attack.
Lifeguards suspected a combination of warm ocean water, the location of the surfer in a deep channel, and “a lot of fish” in the area, had attracted the shark closer to shore.
Avoca Beach and North Avoca were closed following the attack.
A Department of Primary Industries assessment would be used to determine when either beach would be reopened.

Fears over fast-tracking of controversial project