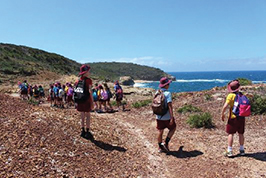 Year 4 students from Umina Beach Public School have visited Bouddi National Park to learn about the park’s history and wildlife.
Upon arrival on October 27, the children were split into two groups, with one group focusing on the Park’s wildlife and the other learning about local aboriginal culture and items.
The animal group studied animal calls, scats and various remains such as bones and skins to learn about species found in the area before swapping with the other group, who were learning about tools the aborigines used in their day to day life, such as digging sticks and boomerangs.
The students were then taken on a two kilometre bushwalk through the park and were able to observe some local wildlife including diamond pythons, termite mounds and even a humpback whale.
Students also got to stretch their creativity on the day, painting landscapes of Maitland Bay and versions of the tessellating pavements.
Students concluded their day by collecting banksia leaves for scratch art.