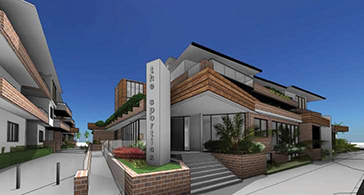 The closing date for submissions on the Woy Woy Sporties redevelopment plans has been extended to December 10, Central Coast Council has announced.
“The application for the redevelopment of Sporties at Woy Woy was renotified following preliminary consultation with Water NSW,’ according to a statement issued by the Council
“In accordance with the requirements of the Environmental Planning and Assessment Regulations, submissions will be received up until December 11.”
The application to build seniors housing on the corner of Brickwharf Rd and North Burge Rd, Woy Woy, saw around 80 residents attend a public meeting at the Woy Woy Sea Scouts Hall on Saturday, November 4.
The plans would see the current Sporties Bowling Club demolished and replaced with a three-building, four-storey complex including seniors’ housing, retail outlets, a new club and basement parking, built over three allotments.
Mr Ross Cochrane, from the recently-formed Save Woy Woy Waterfront group, said the meeting was attended by residents, club members, bowling club members and fishing club members.
The site owner and developer Mr Tony Altavilla also attended and addressed the meeting.
“We collected 55 signatures from people who wanted more information about the features of the proposed development that they could object to and we intend to give personal assistance to those people who want to write an objection to Central Coast Council,” Mr Cochrane said.
“At the meeting, we re-emphasised that we are not anti-development.”
He said the ground was opposed only to a four-storey development on a site that would result in the loss of a community facility and the loss of the bowling greens.
“Residents who have concerns regarding the application can make a submission which will be considered and addressed as part of the assessment process,” according to a statement issued by Central Coast Council chief Mr Brian Bell.
According to the Council, the land is zoned both R2 Low Density Residential and RE2 Private Recreation under Gosford Local Environmental Plan 2014.
One of the sites has a height limit of 8.5m and a maximum floor space ratio of 0.5:1.
The remaining two properties have no maximum height or floor space ratio under Gosford Local Environmental Plan 2014, according to the statement.
Central Coast Council confirmed the sites were flood-affected.
“Flooding will be considered further as part of the assessment process,” the statement said.
Local residents have questioned the ownership of a triangular area of the existing bowling greens that is shown on maps, including plans from a 2014 development proposal, as public reserve.
However, the council claimed: “The three parcels are all owned by a private company, none of the properties are owned by Council or are Crown Land.”
The council did not explain why the land appeared in the 2014 site plans as public reserve.
“Everything is commercial-in-confidence but, on the original DA from 2014, it was shown as council land which is why the proposed retail boatshed style restaurants were drawn on an angle,” Mr Cochrane said.
“The land has come to be privately owned since then and we would like to know how that occurred,” he said.