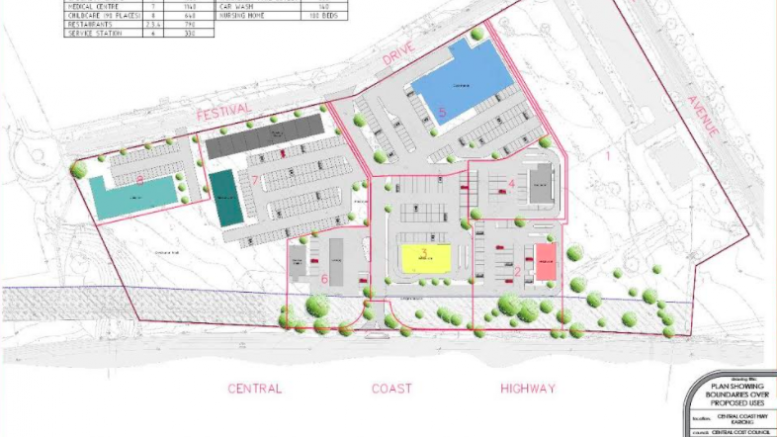 Concept approval is also sought from Council which would see the subdivision transformed into a new 6,000- plus square metre commercial and retail precinct. The land is currently owned by the Crown. Its real property description is Lot 101 in a subdivision of Lot 10 in DP1149050. The application is an integrated development under the NSW Heritage Act 1977 and the Rural Fires Act 1997. Concept approval has also been sought for a Masterplan over the site including a range of commercial uses. According to a Statement of Environmental Effects submitted in support of the DA, “the Masterplan has been prepared to assist in assessing the potential impact of further development on the local and regional road network and any necessary intersection improvements arising from future development”.

The proposal includes: the eight-lot subdivision of the land as Stage 1 of the sites’ development; a left-in, left-out intersection on Central Coast Highway; and adjustments to the intersection of The Avenue and Central Coast Hwy to provide two right turn lanes from The Avenue to the highway. The provision of two right turn lanes from The Avenue onto the highway are to address afternoon peak hour traffic queues. “This work can be accommodated in the existing road reserve,” the SEE said. In addition, the application includes concept approval for the establishment of the following uses on the site: a 1,680 square metre supermarket; 1,600 square metres of specialty shops; a 1,140 square metre medical centre; a 400 square metre gymnasium; a 90-place childcare centre; 790 square metres of restaurants; a future service station subject to rezoning; a vehicle repair station; a car wash; and a 100- bed nursing home or private hospital, subject to rezoning.

The concept approval would be for Stage 2 of the development of the site and separate DAs and rezoning applications would be made for each of the proposed eight lots in the future. Mount Penang Parklands was used as a juvenile gaol since 1912, previously known as the Home Farm for Boys. The Frank Baxter Juvenile Justice Centre was constructed in 1999, and the NSW Government formed the Central Coast Regional Development Corporation to manage the redevelopment of the remaining land. Kariong Mountains High School was subsequently built on part of the land and, according to the SEE, the balance of the land is also being used for “a variety of other community and commercial uses”. The tourist and visitor information centre operated by Central Coast Tourism is located on the land, but doesn’t form part of the proposal and is to be retained on a separate allotment under the Masterplan. Scribbly Gum trees are to be retained under the development footprint.

“For the purposes of the current application, it is assumed that both The Avenue and Festival Drive have been dedicated as public roads and that all services are available to the site in Festival Drive and are of adequate capacity to service the needs of the development,” the SEE said. “The proposal is wholly in keeping with the Precinct Planning already undertaken for Mount Penang and Kariong, and will expand employment opportunities and improve services within the gateway location. “The proposal will further facilitate the establishment of services in the vicinity of the Somersby Industrial area and improve its future functionality and viability.” According to the SEE, the proposed subdivision and concept would create around 500 permanent, part time and casual jobs. “A Cultural Heritage Impact Assessment will be undertaken to inform future development and ensure the distinct qualities and Heritage values of the locale are not unreasonably impacted upon,” the SEE said. “The design has been informed by the known location and value of the subject Heritage Items.

“It is envisioned that the subject proposal will not negatively impact on any Heritage Items.” The State Heritage Register (SHR) listing number 01667 currently describes the entire site as very signifi cant to NSW. The Statement of Significance included with the listing said: “The Mount Penang Juvenile Justice Centre has been the most important juvenile detention centre in NSW for most of the 20th century and is a direct continuation of the 19th century system of reformatory training. “The design of the early buildings, their confi guration and the layout of the site itself, as well as its agricultural and pastoral features, its remnant dairy and its landscaping collectively and individually illustrate juvenile penal philosophies and practices of the period and their subsequent evolution over 85 years of operation.

“The location of the centre is a feature in the historical expansion of the City of Sydney into its rural hinterland and its operations are an element in the development of Gosford and the Central Coast.” The Highway Commercial Precinct is deemed to have the least significance and this is reflected in Councils’ DCP, according to the SEE. Only 37 submissions were received in relation to the application, which means that it does not have to be presented to a Council meeting prior to being approved. No market value was provided on the DA.