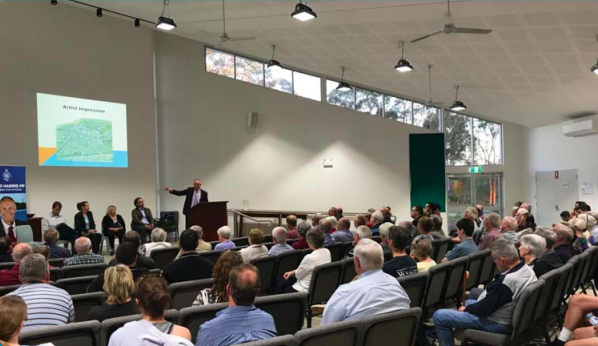 Member for Wyong, Mr David Harris, has called on Central Coast Council to consider rezoning land in the Warnervale district to allow other players to build retail and commercial premises because Woolworths are taking too long to begin the long-promised Warnervale Town Centre.
Following an angry public meeting on November 9, Mr Harris said he was backing calls by residents to consider allowing other options to speed up the delivery of retail, in particular, to residents of Warnervale.
Woolworths in correspondence, whilst indicating that they were still interested in building the promised town centre, failed to establish a timeline, instead saying that they were monitoring residential development in the area, according to Mr Harris.
Residents believed that the approved new estates, together with existing development, created a critical mass for such development and felt that by introducing competition from other players, it might push Woolworths to begin.
A $23 million intersection and a $3 million access road were completed in 2013 and have since sat dormant.
“Woolworths currently is the only company that can build the town centre as they wholly own the land at the top of the hill, and residents feel they are being disadvantaged by that situation,” Mr Harris said.
“Currently, anyone living West of the Pacific Hwy in the new estates of Hamlyn Terrace, Woongarrah and Warnervale, must use a vehicle to buy even a loaf of bread or a carton of milk, putting extra pressure on local roads,” he said.
“An option to rezone other land and look for prospective proponents must be considered to finally get development moving to support the housing growth in the area, and I call on Central Coast Council and the State Government to strongly consider this.
“Residents have waited for too long for this to start.”
Over 100 people attended the public meeting at the Warnervale Regional Uniting Church on November 9 to discuss infrastructure in the greater Warnervale area.
Many topics were covered at the meeting including the long-awaited Warnervale Town Centre as well as the unacceptable condition of key local roads, including Louisiana Rd and Warnervale Rd.
Four newly-elected Councillors were in attendance.
Clr Doug Vincent, Clr Jillian Hogan, Clr Kyle MacGregor and Clr Louise Greenaway were all present to listen to the issues raised by locals and each promised to follow up on and fight, in Council, for the issues raised.
The former Wyong Council was frequently condemned by the residents who attended the meeting, mentioning things such as the $20 million spent on the Warnervale Airport while basic roads were falling apart or, in some cases, incomplete.
Member for Wyong, Mr David Harris, said he encouraged locals to join with him in working with the new Council to turn over a new leaf and get long-awaited projects off the ground.
“When I moved to Hamlyn Terrace 16 years ago, we were promised that a town centre would soon be built in Warnervale,” Mr Harris said.
“I understand the frustrations of the community and I share them as a long-time local resident,” he said.