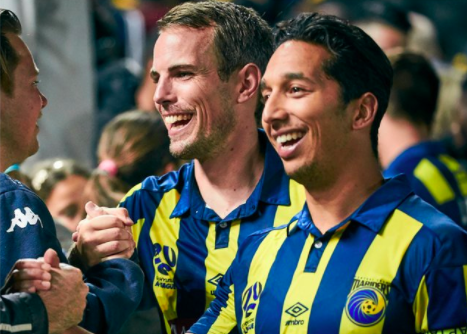 On the eve of the Central Coast Mariners Thursday night hit out against Adelaide United, Paul Okon spoke to media about their round seven clash at Central Coast Stadium. Kick-off is 7:50pm.

After a momentous win over Sydney FC, the Mariners now have a prime opportunity to turn back-to-back home games into back-to-back wins. With a Thursday night game looming, the Mariners were forced to keep celebrations short-lived and quickly re-adjust their focus to a crucial match against Adelaide United.

Adelaide come to Gosford hungry for three points having lost their past three games against the Newcastle Jets, Perth Glory & Melbourne City after going their first three games undefeated.

“Everyone’s fit and ready to go after a difficult game and the team that we put out against Adelaide tomorrow night needs to be at 100 percent,” Okon said. “Ladder position at the moment isn’t a concern to us – we know it’s going to be a difficult game and every game presents a new challenge.

Coach Okon said “We’re playing at home, we’re playing some good football and we’re full of confidence so hopefully we can get another win.”

“Tom [Hiariej] took the armband when Alan [Baro] was shown the red card so he will be our captain on Thursday night,” Okon said. “Tom certainly doesn’t lack experience and he was one of our best players on Friday night so I am sure he will enjoy the occasion and responsibility of wearing the armband.
“But, what’s important is for everyone to understand how hard they worked against Sydney and that we can repeat that,” Okon said.

Our Pre-Game Function will be hosted in the Gosford Bowling Club (entry via the Eastern Side of the Stadium). Before heading into the stadium you will be able to try the Coast’s best craft beer and grab an affordable pre-game meal with a BBQ in operation that has a menu starting from $3 which includes steak and sausage sandwiches.

Mariners back to their winning ways