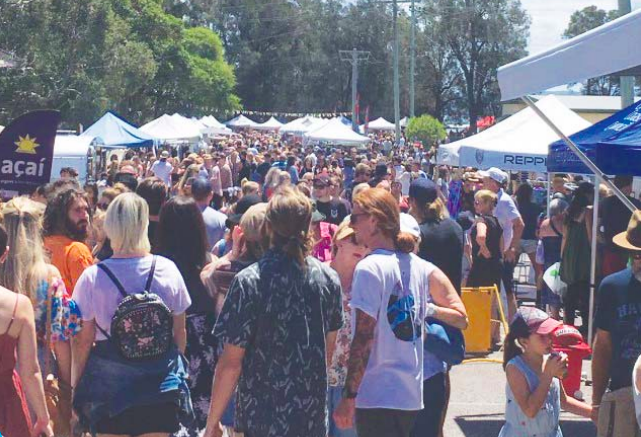 The highly anticipated Long Jetty Street Festival was back for its third instalment on Sunday, November 19.
With the huge amount of support received to date from the local community and beyond, the organisers saw the need to extend the site to cater for extra festival goers, with more than 15,000 people in attendance.
There was plenty more in store for families, music and art lovers, foodies, skaters and so on, thanks to the creative network of folk from across the Coast that helped bring the event together.
Invited back for the second year in a row by Central Coast Council, #LJSF17 was proud to be the closing event of the The Lakes Festival Program.
Music and culture were at the very heart of the Long Jetty Street Festival (LJSF), with the Six String Stage again curated by local music scenesters, Mountain Sounds Presents, and headlined by the Central Coast’s own golden girl, Kasey Chambers.
Other popular acts on the main stage were Sydney girl gang, Rackett, and locals, The Sea Gypsies, Ivy and Tiger Town.
Local acts who took to the Lake Stage on the day included Little Quirks, Chelsea Berman and The Fields Project.
The Art Precinct once again offered a collection of some of the Coast’s freshest and eclectic art, live art expos and performances, and featured works from established and up and coming local talents.
It was curated by, Ms Bonnie Gray, and Mr Grant Molony, both of whom created unique moveable pieces within the Art Precinct on the day.
Central Coast alumni, Mr Brent Smith, ‘Welcome to Long Jetty’ mural co-contributor, completed the wall mural, as part of the official LJSF programme.
Other artists included: Mr Jack Barnes, Ms Grace Agnus Vuetaki, Ms Diem James and Mr Joel Picklum.
The Kidz Zone upped the ante this year with Dress-Up Attack’s entertainment booker, Ms Loren McHenry, curating the festivities.
The Kidz Zone kept young Coasties entertained with an array of hands-on activities including interactive instrument activation, courtesy of Bangin’ Buses, a Musical Sensory Tree, A really big lakeside Slide, Blackboard Draw Disco, Sand Art and a hay bale Bowling Alley.
New attraction, the “Book Nook”, featured a variety of local guest readers, including Melbourne based author, Mr Andy White, who presented his children’s books, ‘My Daddy’s Got Tattoos’ and ‘My Mummy’s Got Tattoos’.
The 2017 Green Zone, sponsored by Long Jetty and Avoca Produce Swaps, saw produce swaps, workshops and information sessions with local backyard Bee-Keepers, Worm Farmers, Permaculturists and green-thumbs.
Foodies were also well catered to on the day with stalls from Gourmet Gozleme, El Poco Loco, Hunter Ice Cream, Fritz’s Weiners, Diego’s Donuts, Viet Yum, Donnie Eats and an abundance of other stalls and displays to enjoy.