The Alison Homestead was rebuilt after a 2011 fire

The Wyong District Museum and Historical Society, operators of the historic Alison Homestead, have been waiting for more than three years for Council approval for a new administration building.
The volunteer group also has a $9,000 rates bill it is refusing to pay.
President of the Society, Mr Greg Denning, said that prior to a fire in 2011 that saw the museum gutted and unusable for three years, the Society had run the property on a “peppercorn rate”.
Following the fire, and without explanation, they were sent a $4,500 rates bill from the former Wyong Council.
“For the three years we didn’t operate, they didn’t give us any monetary help, we had to keep up the maintenance and pay all the expenses,” Mr Denning said.
“We refuse to pay and the bill is now up to $9,000.
“It costs us $22,000 to run for a year, out of our money that we have raised with morning teas, luncheons and weddings, and they want us to pay $9,000 to keep their wonderful place going.
“If Council want to put wages in to running it, they are looking at $150,000 a year.
“We have since done a survey and nearly all museums in NSW pay no rates to Council,” he said.
Mr Denning said he was thankful that Central Coast Council had finally given development consent for a new men’s shed building on the site, but remained concerned about the lack of communication and cooperation that had continued following the September 9 election.
Mr Denning provided the Wyong Regional Chronicle with a copy of a letter he wrote to Central Coast Mayor, Clr Jane Smith, and three local Councillors on October 19.
On November 20, he had still not received a response or even acknowledgment of his letter.
The letter explained that the Society was a group of volunteers who run and maintain Alison Homestead.
“In 2014, we applied to Darren Webber for a Community Building Partnership Grant of $32,800 to build a new office/research library in the grounds of the Museum,” Mr Denning’s letter said.
“When this grant was successful, we submitted a DA to Council to replace the onsite caravan [used as an office] with a new building.”
The original Homestead that was partially destroyed in an arson attack had 12 rooms of displays plus an office area.
“The new building only has four rooms for displays plus a kitchen and toilet,” the letter said. 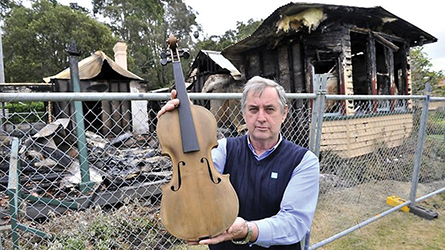 Mr Phil Morley, former President of the Society, with an exhibit and the fire-gutted homestead in the background

“In the long term, we cannot justify using any of the four rooms in the new building as it would severely limit the area available for displays.
“There is nowhere near enough space to accommodate the necessary office equipment and staff needed to efficiently run the business, let alone a research library area as well.
“We did not hear back from Council, so in March 2015, we called them asking about its progress, to be told they couldn’t find the DA.
“When they did locate it, we met with staff from the Property and Asset Management section to discuss our proposal.
“At the same time, we raised the issue of a possible addition to the onsite Men’s Shed which has been in operation since May 2013 and had reached its capacity, to safely and efficiently accommodate the necessary equipment, and to cater for the variety of activities and projects undertaken by the ever growing membership.
“In July 2015, we submitted a DA for the extension to the Men’s Shed and applied for another CBP grant for $13,200, which was also successful.
“Council then advised they were going to undertake a Site Management Plan, which was never done.
“Then, when we followed it up in 2016, they advised that they would undertake a Plan of Management (POM).
“The State Government were overwhelmingly supportive of our position and extended the timeframe of both grants from the usual one year to three years, but understandably, at the end of that time, we lost the $46,000 of funding.
“We have since had $60,000 donated to us for these two projects from a local charitable foundation who became aware of our situation.
“We are still waiting for answers from Council regarding the POM.”
“With the new beginning following the arson attack in 2011, the volunteers, who run and maintain the Museum and grounds at no expense to Council, are committed to modernising the methods and practices of this iconic community site to guarantee its long term viability.
“We would like to see the Museum become an integral part of the community, providing world class opportunities for participation in a wide variety of activities, and ensure the site establishes itself as a venue for visitation for both local and out of area schools, clubs, groups, and tourists.”
On November 20, Mr Denning confirmed the DA for the Men’s Shed building had been approved.
“We’ve ended up with a very large tin shed which looks like a very large tin shed,” Mr Denning said of the rebuild.
“It is great for our exhibitions and we have a great new area for functions, but we have lost eight exhibition rooms, and one of the exhibition rooms is now being used as an office,” Mr Denning said.
He said the Society’s proposal for the new administration building would include a fire-proof archive system, an area for computers and filing, and an open area for people to come and do research and find photographs and history.
Mr Denning said a visit on Friday, November 17, by the Friendship Force, demonstrated the popularity of the venue.
“They came with about 20 Mexicans and their carers, and they were absolutely blown away with the museum and how atmospheric it is,” he said.

Not all bikes can be reinvigorated