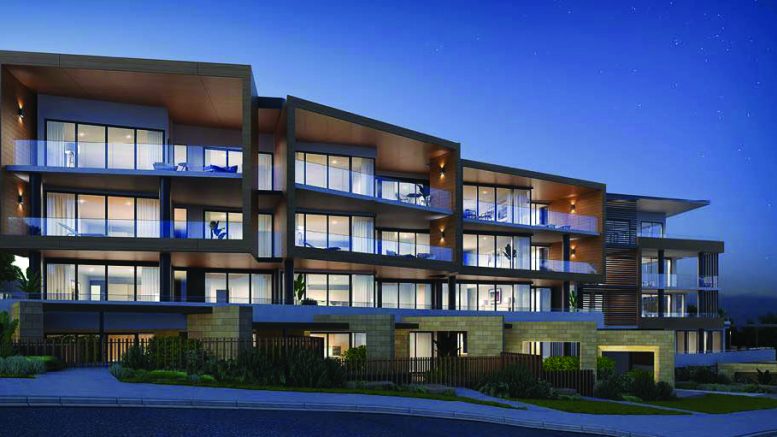 Only two apartments remain unsold in Terrigal’s new residential development, Elysium, following its launch to the market.
The launch saw record-breaking prices of over $20,000 per square metre reached for the first time on the Central Coast.
Founder and Managing Director of Central Real, Mr Tony Denny, said, “Elysium proved so popular, especially with local buyers, because it offers the premium quality and stunning waterside aspects associated with somewhere like Bondi or Manly in Sydney, at less than half the price.
“As buyers feel increasingly priced out of the Sydney market, the Central Coast is opening up as a strong option for people who still want high quality homes in a stunning location and an aspirational beachfront lifestyle,” Mr Denny said.
“Elysium ticks all these boxes but at a far more accessible price point than a similar style apartment in Sydney,” he said.
Sixty two out of the 64 luxury beachfront apartments were sold, with just two four-bedroom homes remaining, however, despite the stated strong interest from Sydney, 74 percent were local buyters.
The launch included the sale of two penthouses at $3.1m and $3.2m, with stunning views of Terrigal Beach.
The development received interest from a mix of buyers including 66 per cent owner occupiers and 34 per cent investors.
General Manager of McGrath Central Coast, Mr Jaimie Woodcock, said, “I’ve been a part of the local property industry for over 25 years and I’ve never seen a response to a campaign quite like it.
“Elysium really struck a chord with a broad spectrum of buyers, particularly local downsizers that were captivated by the quality of the project.
“The launch day itself was an incredible experience with most of the apartments secured before midday and a clear indication that the market is seeking quality solutions to the changing lifestyle on the Central Coast,” Mr Woodcock said.
Elysium comprises 64 two, three and four bedroom apartments across six architecturally-designed buildings.
Apartments have a selection of ocean and garden views that have been designed to maximise liveability, with a highly sought-after north-facing aspect.
Elysium also provides a fully landscaped, resort-style 25m swimming pool.