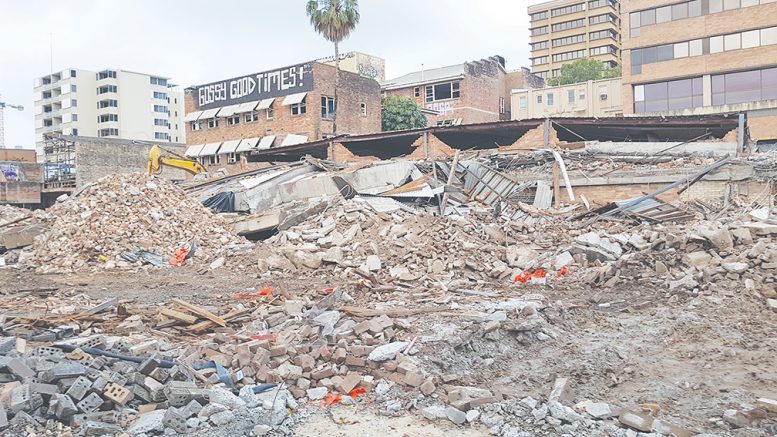 Rubble on the site of the former Gosford Youth Centre on the corner of Baker St and Georgiana Terrace where more asbestos has been found Photo: Justin Stanley

Central Coast’s Deputy Mayor, Clr Chris Holstein, wants Council staff to explain why the demolition of the Waterside development site that spans Gosford’s Baker St, Mann St and Georgiana Terrace has continued to be such a stop-start affair.
“We are asking questions now on why, on the old Spurbest site, there is a stop and start on the demolition,” Clr Holstein said.
“I saw a couple of months ago they started to demolish and that has now stopped,” he said.
“I have asked the staff why.
“Is this stop and go a delaying tactic to put back doing something with the site?” he said.
Mr Cain King from CKDS Architectural services said the demolition delays were due to the discovery of asbestos.
“It hasn’t stopped, but we have needed to attend to WorkCover and Council requirements to remove the asbestos, and that has been causing the delays,” Mr King said.
“It seems like each step uncovers more asbestos on the site and I would not expect WorkCover or Council to behave with any less than due diligence about its removal,” he said.
“The demolition work has uncovered more asbestos in the Froggys site and in the former youth centre building,” he said.

According to Mr King, each time asbestos is uncovered, the demolition team has to stop work, and asbestos experts need to be called in to do an assessment.
“Then builders have to plan and price the variation and then the owners have to approve that variation.
“The asbestos specialists then have to come back in to remove the asbestos and confirm its removal.
“Then we have to get the builders back on site and they have, by then, moved on to other jobs, so we have to wait until they are available again,” he said.
Mr King said the owners of the Waterside development site were not delaying progress.
“The owners are not stalling, they are wanting this, more than anyone else, to be done.
“They are knocking on our door every other day saying when will it be finished, when will it be finished?” he said.
In other news about Gosford property developments, Mr King said construction of Bonython Tower in Mann St was continuing apace with the Level 1 floor slabs poured.
“We will start seeing it go up over the course of the next year and it is likely to be finished around Christmas 2018,” he said.
Mr Holstein said he was also seeking updates from staff on the status of the site for the building of the NSW Government finance building to be constructed on part of the remaining two thirds of the former Gosford Public School land.
He said he had received a briefing on the status of the new ATO building in Georgiana Terrace, which is nearing completion.
“I have been able to meet one of the key players and it will be incrementally opened as staff are brought on board,” he said.
“These things do not happen overnight.”
Mr Holstein said he was also concerned about Gosford City traffic management, particularly around the Gosford Hospital.
“The Hospital redevelopment is brilliant but the traffic movement around it is going to be crucial.
“I have seen nothing about work on Racecourse Road, and the traffic at the roundabout near Gosford High School is a disaster.
“I have raised that in conversations with the state member and Lee Shearer and she has said the government architect is coming and I hope to be given that opportunity as a councillor to have input.
“Traffic planning around the hospital needs to happen sooner rather than later.
“That infrastructure and those traffic movements around there will be crucial.”