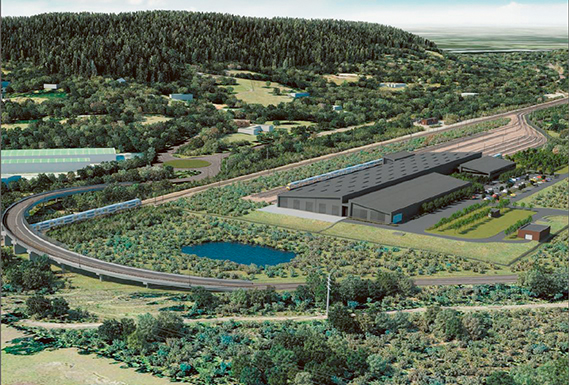 Artist’s impression of the train maintenance facility to be built between Kangy Angy and Enterprise Drive, Ourimbah

Central Coast Mayor, Clr Jane Smith, has confirmed that the 15 Councillors have received a briefing from Transport for NSW about the proposed rail maintenance facility at Kangy Angy.
“We did get the briefing, and I guess it was useful for the councillors and myself to get a bit of the understanding of the proposal,” Clr Smith said.
“I think that there are still concerns among the Councillors,” she said.
However, Clr Smith added that the Central Coast Council had “limited ability” to stop the facility going ahead.
“Council does not have a decision-making role, but I think there will be further discussions amongst the Councillors about how we can further represent the interests of the residents,” she said.
Transport for NSW was sold flood-prone, ecologically sensitive land at Kangy Angy, by the former Wyong Council, as the location for a maintenance facility for its new inter-city train fleet.
Following the dismissal of Wyong Council, NSW Government appointed Administrator, Mr Ian Reynolds, resolved to go ahead with the sale of the land.
Transport for NSW had other alternate locations for the facility, including land at Warnervale that the former Council had earmarked for other projects, and Darkinjung LALC-owned land.
The price received by Central Coast Council for the land has never been made public, nor has the business case that Council used to encourage Transport for NSW to select Kangy Angy as its preferred site.
Affected residents, the Kangy Angy Residents’ Action Group (KARAG), have been attempting to stop the development since 2015, but Transport for NSW has stated that work will commence by December.
Clr Smith said she had no knowledge of a confidential report being circulated to Councillors following the Transport for NSW briefing.