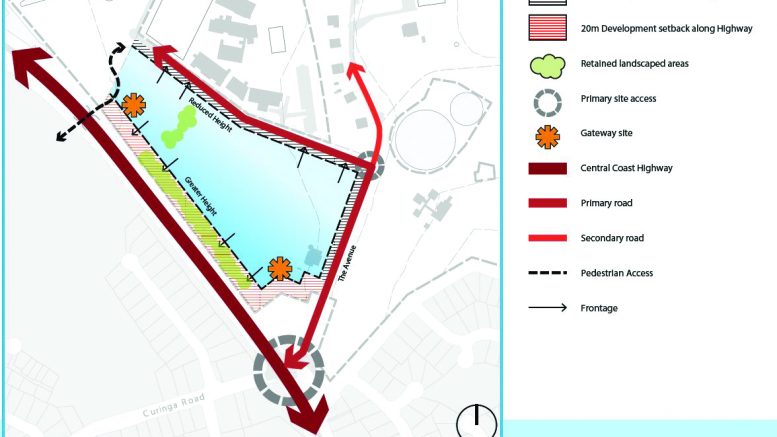 Central Coast Deputy Mayor, Clr Chris Holstein, said he has been approached by a number of individuals concerned about a proposal to develop a new highway commercial precinct on the Kariong Parklands.
“I have already had some approaches from individuals with concerns on it and I have put it to those individuals that they need to prepare their submissions and send their submissions to me so that I can look at what their concerns are,” Clr Holstein said.
“I need to look at the plans to see if there is validity in the concerns,” he said.
“I am mostly worried about traffic impact and impact on the festival site, including reliance on that land for parking and events.”
As reported previously in Coast Community News, Parklands Kariong Development Pty Ltd has submitted a development application to Central Coast Council for an eight lot Torrens Title subdivision within the Highway Commercial Precinct at Mount Penang.
The private company is already seeking concept approval to transform the subdivision into a new 6,000-plus square metre commercial and retail precinct.
The date for submissions closed on September 25 and 37 submissions were received by Council, 13 short of the 50 required for the matter to be considered at a public Council meeting.
The rule that 50 substantive objections are required before a planning matter could be referred to a Council meeting was adopted during the period when NSW Government appointed Administrator, Mr Ian Reynolds, replaced the Coast’s elected local representatives.
“I think for anything that controversial, in the community of concern residents, it is not difficult to get up that many objections, believe me,” Clr Holstein said.
“I would have thought 20 to 25 objections can be a reasonable amount but, remember, any two Councillors can bring anything to Council, so there are safeguards in regard to that,” he said.
Although he would not be drawn on whether he would be prepared to join forces with a second Councillor to take the current Mount Penang proposal to a meeting, he said it was the responsibility of Councillors to bring matters of public importance to the table.
“It is about the due diligence of councillors and the effort they are putting in and how they are relating to the community,” he said.
“If a community member says look, I have problems with a DA, a Councillor can sign up with another to bring it before council.”
Clr Holstein’s years of experience on the former Gosford Council meant that he was more than familiar with the history of the Kariong Parklands.
“That was going to be the venue for the international flora festival,” he said.
A proposal was done in the 1990s that was going to bring the magnificent international flora festival to NSW, that would showcase Australia, and it had the backing of the former Environment Minister, Mr Barry Cohen.
“But for a range of reasons, it didn’t happen, but we did get a small garden area up there, a big festival development site and then, further down the track, they went and plonked a high school on it.
“There was an argument that the high school should have gone on the other side of that land.
“It was also earmarked for a high tech industrial zone which didn’t eventuate either.
“That is part of the detail of the information that won’t be known by a lot of the new councillors.
“I can tell you that part of the festival site was going to be an Indigenous interpretive centre in the form of a giant turtle and there was even a proposal to move the Powerhouse Museum to the site,” he said.
The Mt Penang development site is controlled by the Central Coast Regional Development Corporation (CCRDC) which is part of the NSW Government Planning Department.
According to the Mt Penang Development prospectus, available on the CCRDC website, CCRDC owns the land known as Mt Penang Parklands, which comprises a total of 156 hectares.
It is also charged with securing the ongoing management of public open spaces and community facilities at Mt Penang “protecting and enhancing the broad Mt Penang Parkland Precinct”.
The prospectus included two sites within the Parklands that are earmarked for development: the Kangoo Road Commercial Precinct and the Highway Commercial Precinct.
The current DA relates to the Highway Commercial Precinct.
In a written statement CCRDC has confirmed: “The land is currently under contract to the Parklands Kariong Development Pty Ltd following exchange of contracts in September 2016.”