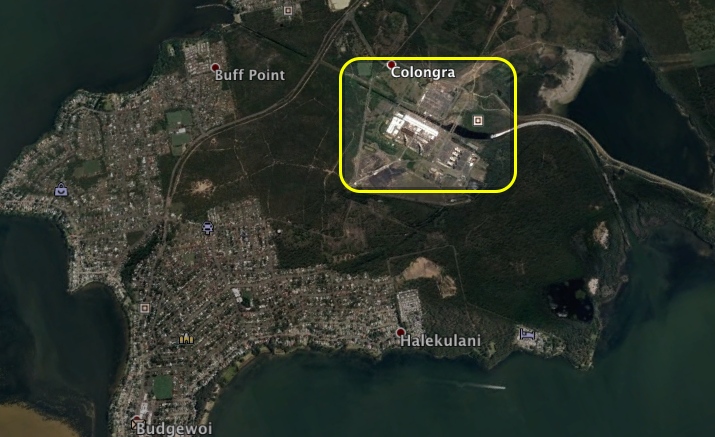 Snowy Hydro has stated it is not in a position to release a report from the two studies it has commissioned to test for the presence of contamination from firefighting chemicals in and around its site at Colongra.
In a written response to questions from the Wyong Regional Chronicle, Snowy Hydro confirmed that it had commissioned two studies “to further investigate the findings of a baseline contamination report which was provided to Snowy Hydro when they purchased the site off Delta Electricity,” the statement said.

The Colongra Power Station site is located within the grounds, to the east, of the old Munmorah Power Station(see image).
According to Snowy Hydro, trace amounts of PFAS have been located in the former fire fighting training area south of the Colongra Power Station on Snowy Hydro land, and at a number of sites outside of the boundaries of Colongra Power Station on Munmorah Power Station land.
In response to a request for Snowy Hydro to provide the test results and the preliminary report with the draft analysis of those results that it provided to the EPA and the owners of Munmorah in the week commencing September 18, the Snowy Hydro statement said: “We are not in a position to release the report until it has been finalised.
“We are currently waiting for input from the EPA.”
GPM, owners of the Munmorah Power Station site, submitted a proposed sampling plan designed to confirm the origin of the recent detections of PFOS to the EPA, according to Managing Director, Mr Stephen Saladine.
“We await feedback from the EPA on that plan,” Mr Saladine said.
“It is a quite extensive undertaking should it proceed as proposed, and I would expect will take some time to complete,” he said.
“I understand the EPA are talking to Snowy Hydro about other sampling, however we are not privy to these discussions.
“Please note that in relation to the fire fighting foam residues found at land owned by GPM there has been no identification of PFAS.
“The slight material traces which have been found are PFOS, a chemically different compound and one that is not considered in literature to be as high of a risk as PFAS,” Mr Saladine said.
In a written statement, the EPA confirmed it was reviewing the testing proposals put forward by Snowy Hydro and GPM Co and would inform the community of the time frames and results as they become available via its website.
The EPA has also confirmed that additional testing would include “sampling fish, eels and prawns around the power stations and in the wider Tuggerah Lakes and a human health risk assessment to understand the potential for exposure to PFAS from the sites”.
Mr Gary Blaschke, spokesperson for the Northern Lakes Disability Tourism Precinct, in a recent video news interview with the Wyong Regional Chronicle’s Jackie Pearson, said: “We don’t know to what extent the PFAS is there.
“They are currently carrying out studies which I believe are too slow.
“They are doing fish testing in Lake Munmorah and Budgewoi Lake to find out if the fish have been affected.
“I have called for the sea grasses to be tested as well, because I believe if it gets in the sea grasses, it gets in the whole system,” Mr Blaschke said.
“It’s serious enough for the site operators to put out letters to local people in Buff Point to say if you’ve got a bore, don’t use the water,” he said.
The complete video news interview with Mr Blaschke can be seen at coastcommunitynews.com.au/video-news/.
Interim Secretary for the Central Coast Greens, Mr Wolfgang Koerner, said: “What is developing before our eyes with the PFAS and PFOS substance contamination is a global realisation of dread within the research community.
“Here is yet another group of harmful bioaccumulative substances that was created and widely used in the name of progress and good science,” Mr Koerner said.
“We are seeing the same familiar trajectory of, lead, mercury, CFCs and VOCs, where compounds were cleared for widespread industrial application by public regulators based on poor and insufficient science,” he said.
“The harmful effects on people and the environment become apparent way too late and are then either irreversible or manifestly intractable.
“Our governments’ responses should be motivated by responsibility and transparency.
“Instead, we are seeing our government agencies and regulators adopting an approach of limiting liability and managing risk, a corporate response that is clearly in conflict with the public interest,” Mr Koerner said.
Wyong Regional Chronicle will ask for updates from EPA, Snowy Hydro and GPMCo prior to publishing each edition.

Local identity Gary Blaschke talks to journalist Jackie Pearson about the PFAS contamination, “Cancer Clusters” and the environment in and around the Lake Munmorah district.