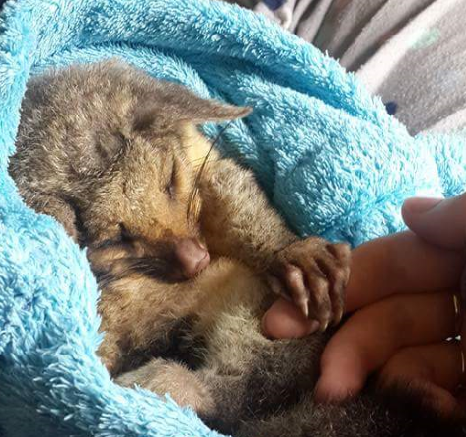 The baby possum while in the care of Wildlife ARC

A baby possum had to be euthanised after it was found shot in Woy Woy on November 1.
Wildlife ARC received a call from a member of the public to deal with an injured baby possum estimated to be a week old.
The baby possum had been shot twice with an air-gun and would not have been able to survive another 24 hours as one of the bullets had punctured its bowel, according to Wildlife ARC rescuer Mr Andrew Crouch.
Wildlife ARC’s head carer of possums Ms Alison Jorge, said there was a chance the bullet first went through the mother slowing down the slug.
Ms Jorge and Mr Crouch both agreed that it was concerning that there is a person in Woy Woy who owns a fire arm and is more than willing to shoot it in a public area.
Mr Crouch said that the possum was at a stage in its life where it was too big for the pouch but still in its infancy.
Mr Crouch said he first thought the marks were from a dog scratch as the possum was found being chased by a dog and the mark looked similar to a dog’s claw.
The possum’s health continued to deteriorate after it was taken into Mr Crouch’s care so he decided to have it examined by a vet.
An X-ray showed two slugs that had been lodged dangerously close to the animal’s spine, Mr Crouch said.
Mr Crouch said he sent the slugs removed from the possum post-mortem to police and filed a police report.
The community has been urged to contact Wildlife ARC with any information about the shooting on 4325 0666.
The fine for animal abuse is either five years of imprisonment or $25,000.

Company fined $33,000 for underpaying a labourer