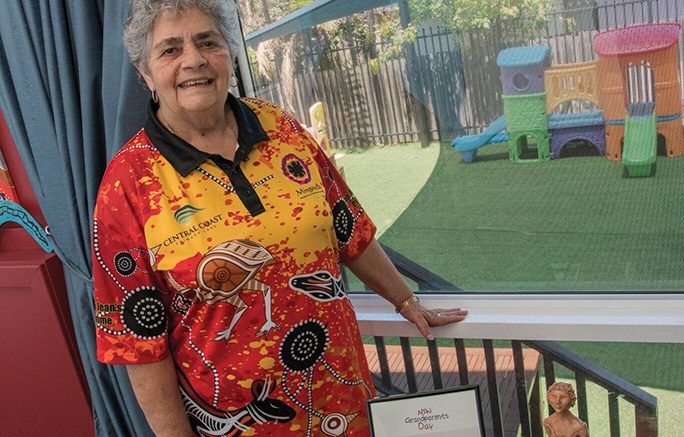 Mingaletta Local Aboriginal Corporation chair Auntie Dianne O’Brien has been awarded the title of NSW Grandparent of the Year.
Auntie Di has had six children, 36 grandchildren and 56 great grandchildren. Two of her children have died.
Now aged 71, Ms O’Brien was born in Wagga Wagga, taken from her mother at birth and placed with an “Irish mum and dad” who raised her in Granville in Sydney.
She moved to the Central Coast and joined Mingaletta in 2004, joined the board in 2006 and has been chair since 2007.
Her adopted mother promised that when Ms O’Brien turned 15 she would take her to Parkes and tell her a story.
“She died in April and I turned 15 in the July,” she said.
Ms O’Brien was then placed in a girl’s home at Parramatta where she soon discovered she was two-months pregnant, the outcome of an assault.
She said all the pregnant girls in the home knew that when they were asked to sign “anaesthetic” papers they were really signing adoption papers for their unborn babies.
Auntie Di would not sign.
“God took my mum and then he gave me this baby girl so I would fight to keep her,” she said.
The matrons at the home gave Ms O’Brien two options when her oldest daughter was born.
She could either leave her at the home and spend five years in another institution or accept the offer from the baby girl’s paternal grandmother to take her in.
“Mrs O’Brien came and got me.
“It was her first grand daughter, so I was married at 16 in Cabramatta Catholic Church to the man who raped me.
“There was no escape.”
She was the victim of domestic violence of her husband, but did not stay in Cobar long, although she has never divorced him.
When she was 30, she started to look for her father and was the second case dealt with by the organisation Link Up, which has gone on to reunite many of the Stolen Generation with their families.
She discovered she was the great grand-daughter of famous human rights activist William Cooper.
Ms O’Brien got to know her birth mother but did not meet her father.
In her 30s and 40s, Ms O’Brien became an activist and community advocate.
She returned to her people’s country at Cummeragunja (Yorta Yorta) located about 35km outside Echuca on the NSW side of the border.
“At Cummeragunja, we got a medical centre up and running, did roadworks, got sewerage and water.
“We developed it and cleaned it up for nine years,” she said.
She also worked as a sexual health worker at Gosford Hospital before transitioning into her current role at Mingaletta.
“I am not a chair that sits,” she said of her role as chair and CEO of Mingaletta.
“I do it because I love it and I am committed to this place.
“We have 800 members, 400 current and 100 who are active and come to our monthly meetings on the first Thursday of each month.”
She said she has seen reconciliation work but is concerned that the wellbeing of aboriginal Australians has “gone backwards” in the past couple of years.
When asked what reconciliation looks like when it works, she said: “It is black and white people working together beside each other to help the community.
“Mingaletta has great supporters in the local community.
“When we have market days or open days, it is mostly the non-aboriginal people who come.
“Some don’t know if they are aboriginal or not, I call them the missing people.
“Some people come here and they find their missing auntie or uncle.
“If you came here on the tall ships, chances are you have aboriginal heritage,” she said.
Auntie Di has written her story but it has not been published yet.
She is proud of her family and of the community that has been built at Mingaletta.
“I get a kick out of helping that person who comes in here and has no home, driving an unregistered car, lost their job and can’t pay a fine.
“They walk out and we’ve found them a job and the fine is paid.
“I like seeing that development. I like seeing all the good stuff.
“I have always said I will retire when I drop.”