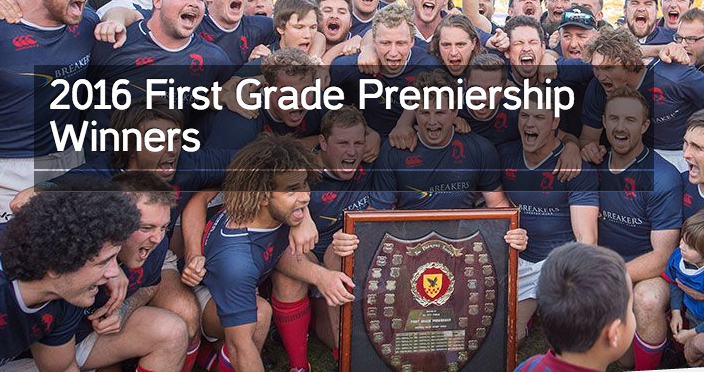 An website image from last years premiership win in 2016

Terrigal have defeated Ourimbah in the Grand Final of the Central Coast Rugby Union Premier 1 competition, winning 39-11, to secure their second successive top grade premiership in front of a large crowd.
The match was played in ideal conditions as both teams commenced the match with a display of very tight rugby in the opening 10 minutes.
Both teams did have some opportunity to post points, but it was not to be until the 15 minute mark, when Terrigal opened the scoring with a great try to, Josh Vainikolo.
Ourimbah were very quick to respond, and their five-eight, Ryan Fenning, kicked a penalty goal in the 19 minute to make the score 5-3.
The match was proving to be an even affair, with both teams having excellent periods of attack, while also displaying some very strong defence.
Terrigal five-eight, Adam Danckert, kicked Terrigal’s first penalty goal in the 23rd minute, to further increase their lead 8-3.
Once again, Ourimbah responded with their own penalty goal, to make the score 8-6.
The first half continued to be a tight affair, as both teams entered the halftime break 8-6.
The second half continued to be a close match, however it was Terrigal who were first to score in the second half.
Terrigal lock, Joe Taylor, completed an effective session of forward attack with a try adjacent to the posts.
Terrigal then took a handy 15-6 lead thanks to the conversion following the try.
Eight minutes later, Josh Vainikolo, crossed for his second and his team’s third try to open a comfortable 22-6 lead with only a quarter of the match remaining.
With 15 minutes to go, Josh Vainikolo, crossed for his third try, to make the score 29-6.
The depth in the Terrigal squad really did come to the fore and all their replacements during the match made their mark, and it was their backline that was most effective.
They were dangerous with the ball and regularly got over the advantage line.
Terrigal cemented the victory with a penalty goal to, Adam Danckert, and an intercept try to winger, Dan Sargeant, to cap off a memorable victory for them.
Ourimbah did score their only try close to fulltime, but it was all too late.
Terrigal had several very good players in the Grand Final.
Five-eight, Adam Danckert, the ‘Player of the Grand Final’, directed traffic all day, and was an excellent link between the forwards and his outside backs.