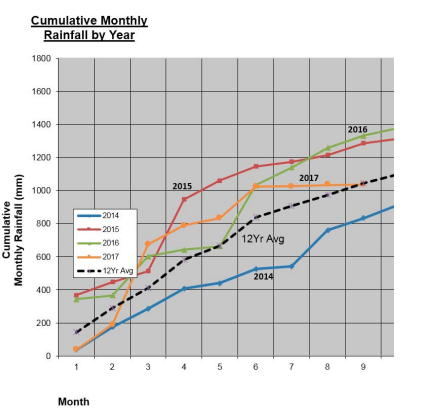 One millimetre on September 14 was the only recorded rain on the Peninsula for the whole month of September (up to September 29).

According to Mr Jim Morrison’s rain data the lack of rain resulted in the month of September being 70mm below the monthly average. The Peninsula’s dry spell has now turned into a dry quarter with three consecutive months of very little measurable rain falling. In fact, only 11.3mm of rain has fallen on the Peninsula since July 1. The cumulative total for the year sits at 1034.9mm which has slipped below the cumulative average for all years of 1044mm. Three more months of dry weather could see the Peninsula’s annual rainfall drop significantly short of the average 1296mm.