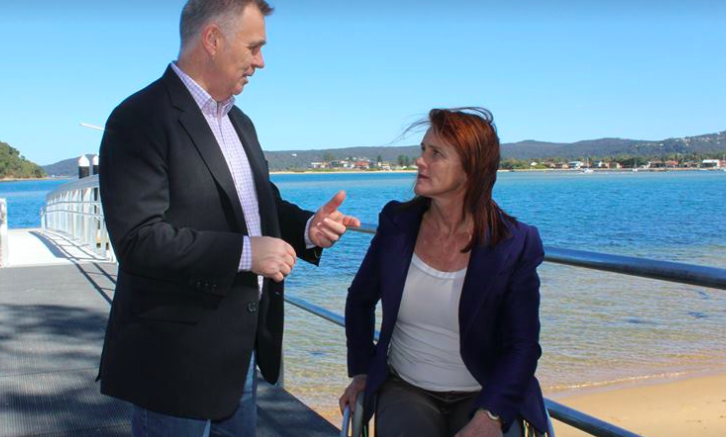 The man at the helm of a ferry that ran aground in the Ettalong Channel is being investigated by NSW Roads and Maritime Services, according to Member for Gosford Ms Liesl Tesch.

Ms Tesch has labelled the NSW Government’s pursuit of the captain of the ferry that ran aground on a sandbar in the silted up Ettalong Channel a “cowardly act”. The Palm Beach to Ettalong ferry was grounded in July and continues to be regularly diverted due to tidal patterns in the mouth of Brisbane Water, according to Ms Tesch. “This incident occurred only two weeks after the fi rst round of emergency dredging was undertaken at the site,” Ms Tesch said. Ms Tesch said she was appalled at the attitude of the NSW Government. “If the NSW Government and RMS try to peg this failing on the driver when it’s likely to be due to the failure of the inadequate dredging, then that is a low act,” Ms Tesch said. “At every step of the way, this Liberal Government has shirked its responsibility to the community to create safe and navigable waterways,” she said. “I expect that the skipper will be exonerated at the end of this, and I hope that this investigation doesn’t leave a red mark on his record.”

Ms Tesch said she wrote to the Minister for Planning, Mr Paul Toole, and Parliamentary Secretary for the Central Coast, Mr Scot MacDonald, in August to raise her concerns about the inadequate response from the Liberal Government. “It is unacceptable for the NSW Government to provide just $150,000 in funding, which was clearly not enough to do an appropriate job, and then walk away,” she said. “The NSW Government needs to urgently invest in a long term solution to this problem. “If the government is willing to put $10 million over four years to fund dredging on the North Coast, then they can’t keep saying it’s a local government issue only. “We have a new Council and the NSW Liberal Government needs to come back to the table and negotiate in good faith to get this issue sorted.”

Ms Tesch thanked Fantasea Cruises and their staff for their flexibility during this disruptive time, and commended them for keeping commuters and tourists on the move despite recent regular diversions to Patonga. The current situation has created an atmosphere of uncertainty in the local area with businesses, commuters and tourists fearing for the future of the waterway, she said. “If suitable dredging is not carried out immediately, incidents like this will become commonplace.” Ms Tesch said Mr MacDonald had to do more than make piecemeal offerings to the Coast and to step up and fight for our community in Government.

“The Government cannot ignore the adverse effect this issue is having on the day-today lives, and livelihoods, of ferry operators, commuters, tourists and commercial fisherman who rely on this crucial waterway,” Ms Tesch said. “If Scot MacDonald is serious about being the Parliamentary Secretary for the Central Coast, then he actually needs to knock on those doors next to his in Macquarie St and get the funding the Coast needs. “If the channel remains in its current state, there is a very serious risk of harm to recreational and commercial vessels as well as the potential for irrevocable damage to the confidence of local operators. “We need to work to promote our strong tourism industry and ensure there are no barriers to businesses that rely on the channel to operate.” The NSW Government announced an additional $160,000 in emergency dredging the day after Ms Tesch’s statements.